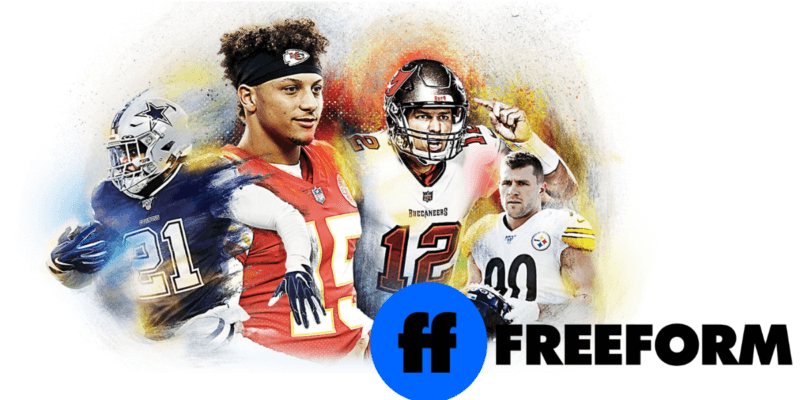 The Walt Disney Company has plans to air this year’s NFL Wildcard Playoff Games — scheduled for January 9 and 10, 2021 — as a “mega-cast” across several of its television networks.

According to a new Variety report:

Some of Disney’s biggest TV networks will “mega-cast” a January NFL Wild Card game across ESPN, ABC, Freeform, ESPN Deportes and ESPN2, part of a larger series of efforts the company has tried over the last year to woo different kinds of viewers to professional football.

Perhaps the most intriguing part of this massive NFL telecast by Disney-owned stations is the fact that Freeform will be specifically targeting a younger, all-female audience of football fans. Variety explains, “Freeform, best known for series such as “The Bold Type” and “Grown-ish,” will offer an experience tailored to a younger, female audience.”

While we do not know exactly what this means, there’s a good chance that the commentators on the sidelines and in the broadcast booth will be women. Variety notes that we can expect the ESPN2 presentation to “feature a concept the company has experimented with in the past that includes commentary that is more free-flowing and conversational.”

This is an exciting time for female football fans. Over the weekend, Vanderbilt University made history as they started a female kicker, Sarah Fuller, who said after the game:

“All I want to do is be a good influence to the young girls out there …,” she said, later adding, “Literally, you can do anything you set your mind to.”

.@VanderbiltU’s Sarah Fuller has broken another barrier for women today. She’s an inspiration to young female athletes across the country. #PlayLikeAGirl #AnchorDown

.@VanderbiltU’s Sarah Fuller has broken another barrier for women today. She’s an inspiration to young female athletes across the country. #PlayLikeAGirl #AnchorDown

Are you an NFL fan? Looking forward to watching the “mega-cast” of the Wildcard Playoff Games? Share this story with a young football fan in your life!