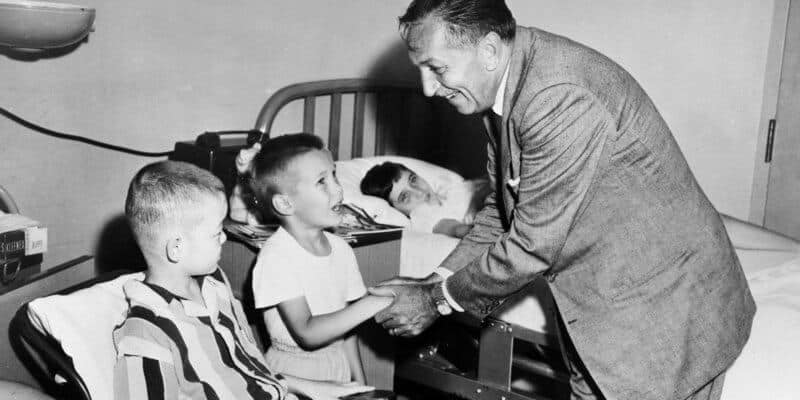 Disney movies have consistent themes about helping people, bringing joy to others’ lives, and believing that all of our dreams can come true. But not every child has their greatest wishes granted or their wildest dreams come to life. Countless children and families are affected by illnesses. But even when seemingly all hope is lost, Disney steps in and makes these kids’ lives just a little bit brighter.

The Walt Disney Company’s ongoing partnership with children’s hospitals has brought magic, pixie dust, and hope to the children and families all across the U.S. And, thanks to Disney, hospitalized kids have been able to experience even the smallest of miracles, from visiting with their favorite Disney character to receiving a toy from their wish list. Not every child can have their ultimate wish granted, but at children’s hospitals throughout the country, Disney makes dreams come true.

The History of Disney’s Commitment to Helping Children

The Walt Disney Company’s support of children’s hospitals dates back to the 1930s, the decade after Walt Disney himself first arrived in California with a suitcase and a dream. Long before Disneyland opened and amid Disney’s first successes at the box office, Walt would visit children in hospitals. He would often bring Disney characters and animators with him to bring smiles to the little ones’ faces and provide them with joy when they needed it most.

“Having a children’s hospital in the community was important to Walt Disney, who in 1960 sat on the hospital’s founding board,” according to Children’s Hospital of Orange County, located just a short drive from Disneyland Resort.

The company’s commitment to helping children continued for decades. In 1980, the first wish was granted by the Make-A-Wish foundation. That wish included a trip to Disneyland — and today, one out of every two wishes granted by Make-A-Wish has some connection to Disney. It seems as though Disney has become almost synonymous with making children’s’ dreams come true, and that is exactly why the company’s support of Children’s Hospital feels so natural.

In 2018, The Walt Disney Company announced a new venture: a five-year, $100 million commitment to helping children’s hospitals nationwide. Disney is dedicating itself to reimagining the patient experience and expanding wish-granting all around the world. Some of these new patient experiences were piloted at Texas Children’s Hospital in Houston back in 2019. Others include the ongoing partnership with Children’s Hospital of Orange County, where Disney opened a new Turtle Talk with Crush room for patients to enjoy.

Walt Disney Company Executive Chairman Bob Iger said, “Using the powerful combination of our beloved characters and legendary creativity, The Walt Disney Company is working with experts in pediatric healthcare to reimagine the patient experience in children’s hospitals around the world – creating a personalized and engaging atmosphere that will inspire young patients and ease the stress of a hospital stay.”

The Disney Children’s Hospitals Program delivers comfort and inspiration to families with children facing serious illness by reimagining the patient and family experience in children’s hospitals. This program comes to life by providing patients and families with special opportunities for shared experiences, exploration and play.

Exceptional offerings and spaces celebrate the resilient spirit of children everywhere by facilitating moments of comfort, joy, empowerment and choice, as well as the chance to connect with family and beloved Disney friends during each visit. 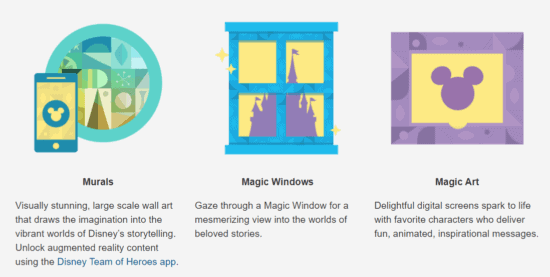 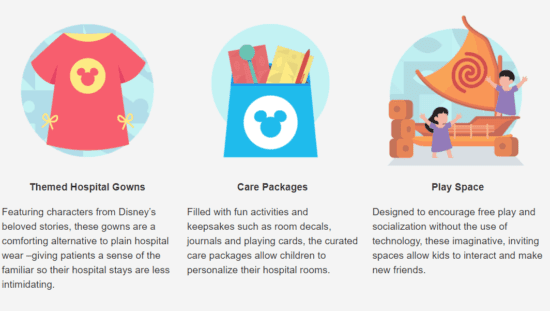 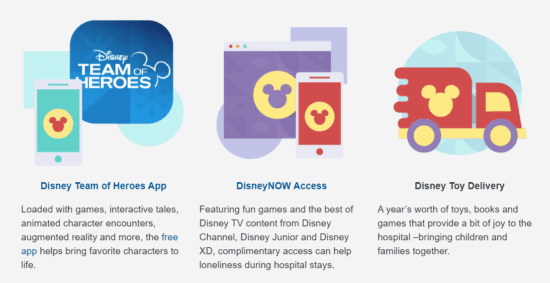 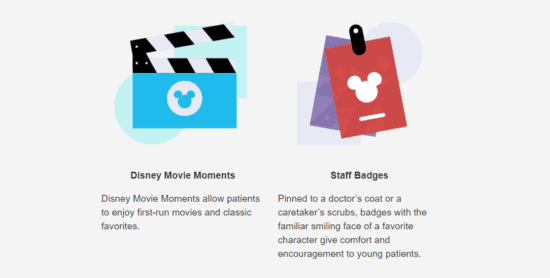 Arnold Palmer Hospital for Children also shares some details about Disney’s Team of Heroes Initiative and the Disney Children’s Hospitals Program. This hospital is located in Orlando, Florida, near Walt Disney World Resort. 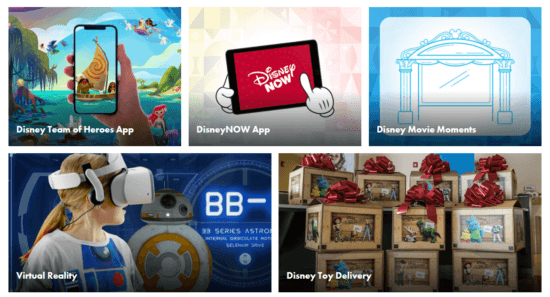 In January 2021, Disney provided an update on their efforts on Florida and transformed spaces that are now part of the patient experience at AdventHealth for Children, Arnold Palmer Hospital for Children, and Nemours Children’s Hospital.

“At Disney, we recognize the positive impact our characters, stories and renowned creativity can have on children facing serious illness and their families, and we’re so excited to bring our children’s hospitals program to these three Central Florida hospitals,” said Elissa Margolis, senior vice president, Enterprise Social Responsibility, The Walt Disney Company. “We’re proud to be able to make a difference in our local communities and we’re thankful for the strong support from the hospitals’ staff, healthcare professionals and experts that made this unique collaboration possible.”

Do you have a memory at a children’s hospital? Did you or your child have a wish granted by Disney? Or was your hospital experience made better thanks to Disney’s commitment to bring joy to hospitalized children all around the world? Share with us in the comments!