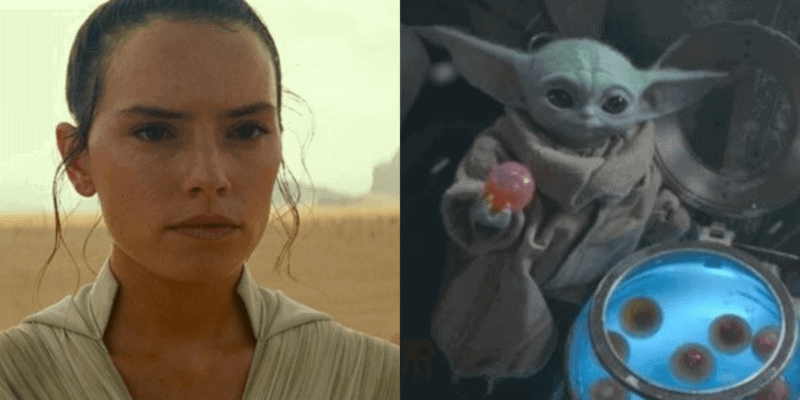 Star Wars icon Daisy Ridley has come to Baby Yoda’s defense for his controversial snacking decision in the second episode of The Mandalorian Season 2, “The Passenger.”

“Oh, cancel culture,” Ridley began, with a chuckle to IGN. “Look, Mando’s gotta eat, Yoda’s got to get strong. That’s just that.”

To recap the situation, the episode in question revolves around Mando having to transport a character who is being referred to as a “Frog Lady” and her eggs to her husband on another world. While in transit, however, Baby Yoda–or “The Child” as he is properly named–takes a liking to her cargo. Over the course of 50 minutes, we see him eat at least three of the eggs. And this in, turn, caused an uproar on social media making the cutest creature in all the galaxy cancel culture’s next target.

But Rey (Ridley) wasn’t having it.

“No, I’m like, ‘Yoda, do your thing,'” she continued. “The creature [Frog Lady] got to be where she needed to be with the eggs. It’s all good. It was beautiful.”

Ridley is also not the only one to speak out on the situation. Lucasfilm creative art manager Phil Szostak also had some comments to add.

“For the record, Chapter 10 of The Mandalorian makes it clear that the Frog Lady’s eggs are unfertilized, like the chicken eggs many of us enjoy. But obviously, chickens aren’t sentient beings and the Child eating the eggs is intentionally disturbing, for comedic effect,” Szostak shared on Twitter. “Fans of horror know that disturbing things make some of us laugh and some of us squirm, or both. Your mileage may vary.”

In an episode that triggers every viewers’ arachnophobia, comic relief–if not from the egg-eating then from Mando having to act more like a dad and tell Baby Yoda “No!” finger-pointing and all–is definitely needed in this writer’s opinion.

Chapter 12 of The Mandalorian premiere’s this Friday.

What do you think about Cancel Culture going after Baby Yoda? Let us know in the comments!

Comments Off on “Yoda’s Got To Get Strong.” – Daisy Ridley Defends Baby Yoda Eating Eggs