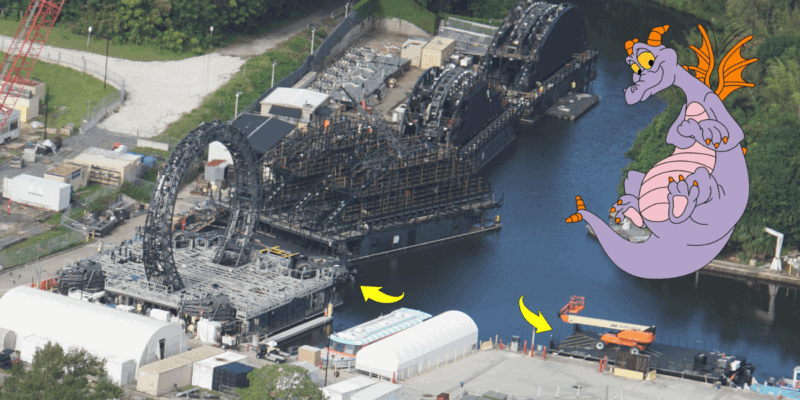 Today, we can pop in on the barges for EPCOT’s highly-anticipated new show, HarmonioUS, thanks, once again, to the aerial pictures provided by @bioreconstruct.

Aerial view of the center water screen of the upcoming EPCOT night time HarmonioUS show. This is actually 3 barges, with the circular screen on center barge. Note the side barges will have rotating arms with effects. pic.twitter.com/TCTlx5ZLTe

There appear to be seven barges total with three fitting together for what appears to be the center barge of the production with rotating mechanical arms with some sort of effects at all four corners. Workers can be seen on the other four walking on service platforms, and at least two barges are still missing the LED screens on their sides.

Aerial view of 3 of the 4 side barges of EPCOT's new HarmonioUS show. At center, workers are on the service walkway between video screens and a rotating arm of that barge. pic.twitter.com/UZP5ZGQVCr

Aerial view of the 7 known barges of EPCOT's new HarmonioUS show. The ring is 3 barges. The semicircular barges will have video. Arrows at 2 recently arrived flat barges, it's unknown what role they have. The boom lift might be on a barge temporarily. pic.twitter.com/ZH85rvCHmV

This is the latest update from HarmonioUS and follows the surprise testing of fireworks back in September and the barges being escorted by police to their backstage area in October.

Aerial overview of EPCOT's backstage marina, where barges are under construction for the new HarmonioUS show. pic.twitter.com/zmacd7hB3e

“Harmonious” is one of the largest nighttime spectaculars ever created for a Disney Park. The show is a beautifully crafted dreamscape of Disney music and images, reimagined by diverse cultural musicians and artists from around the world. It’s a transformative experience, where we can discover how Disney music has the power to inspire and unite us all with the magic of possibility.

This show was originally set to premiere sometime this year, but we will continue to wait with bated breath for an opening date hopefully between now and Walt Disney World’s 50th Anniversary.

Planning a trip back to EPCOT? Our friends at Academy Travel are standing by ready to help. Backed with years of experience and award-winning customer service, Academy’s agents know what it takes for you make this Walt Disney World Resort vacation as magical as possible. Click here to learn more and to receive your free, no-obligation quote today!

Are you excited about HarmonioUS? Why or why not? Let us know in the comments!

Comments Off on PHOTOS: Progress Continues on HarmonioUS at EPCOT