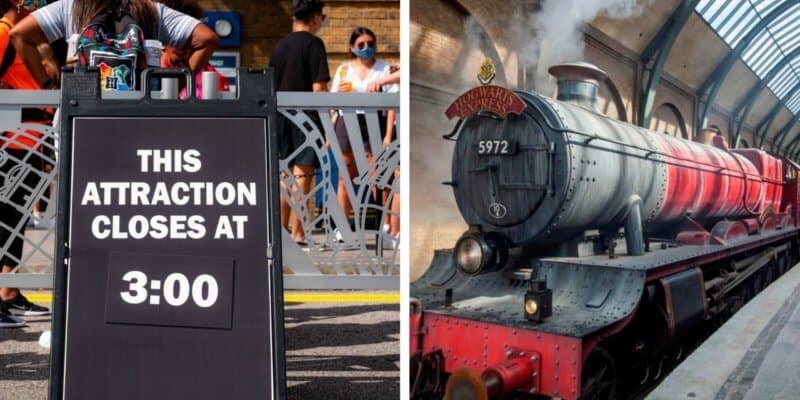 Universal Orlando Resort has been a very popular theme park destination since it’s reopening. Although the park has limited capacity, unlike Disney World, there is no reservation system so guests still have the luxury to wake up and decide they want to hit up Universal Studios for a few hours. Or so we thought.

Universal has recently released statements asking their guests to come to the parks on weekdays and stay away on weekends if possible. The theme parks, specifically Universal Studios and Universal Island’s of Adventure, have been hitting capacity every single weekend as of late, within an hour or so of the park opening. It even happened today, regardless of the announcement from Universal.

Because of the crowds, it seems that Universal has had to find ways to keep things under control, one of which is closing the Hogwarts Express at Universal Studios today at 3:00 pm, 3 hours prior to park close at IOA.

The Hogwarts Express at Universal Studios Florida is closing at 3:00 pm today. pic.twitter.com/HoMYQvCN10

By closing down this attraction, Universal is limiting the ability to park hop internally. The only way to transfer parks would be to walk over to the entrance, which you may or may not be allowed to enter due to capacity.

Although this has not been said by Universal, considering they are asking guests to either visit on a weekday or later in the evening, this forcing guests to exit the parks in order to park hop will allow those who are waiting to enter, a chance to go in. If guests are constantly filtering back and forth between the parks without leaving, the capacity will always be full. Allowing guests to exit the park creates an equal opportunity for more guests to visit Universal throughout the day. But again, that is just my thoughts on the subject.

Thank you for purchasing a Florida resident ticket. We wanted to share some important details to help you make the most of your next visit.

Please be advised that due to increased demand during a time when we’re still limiting attendance as part of our enhanced procedures, there are times when the theme parks may reach capacity and additional guests will not be admitted, especially on the weekends with demand typically subsiding later in the day. If your plans are flexible, consider visiting on a weekday when the attendance tends to be lighter.

We encourage you to check our social channels, UniversalOrlando.com or call the Universal Orlando Resort Capacity Hotline at 407-817-8317 for real-time updates about the parks and capacity as you plan your upcoming visits.

We look forward to seeing you soon!

As we mentioned previously, statement aside, the parks continue to instantly hit capacity on weekends. This message comes days after stronger face covering warnings were put into place, with Universal telling guests they will be removed if they do not properly wear their mask.

It is important to note that as of now, the Hogwarts Express is the only Universal attraction that we can see is closing early today.

Do you think guests should be allowed to park hop on the Hogwarts Express?