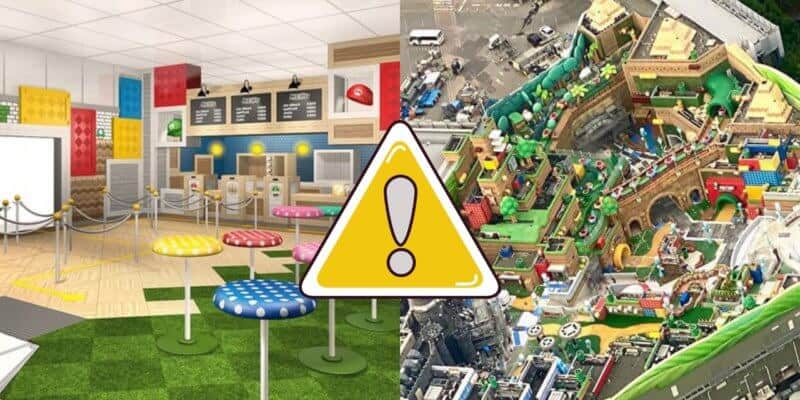 Universal Studios Japan has been working on the next great Universal themed land and expansion: Super Nintendo World. From what we can see from trailer renderings to aerial shots of the land, this will be like walking right into Mario’s video game world. The below shot alone looks like a cartoon world has been placed in reality with all the vibrant colors and levels — Super Nintendo World is sure to bring theme park immersion to the next level like its U.S. predecessor, The Wizarding World of Harry Potter.

Thanks to The Verge, we can see that Universal Studios Japan has announced that Super Nintendo World will open in Osaka next Spring, just ahead of the 2021 Olympics. The land was originally slated to open in 2020 alongside the Olympics, but both were pushed back due to the pandemic.

Luckily, theme park goers in Japan will not have to wait long to get a taste of Super Nintendo World as one of it’s dining locations is opening October 16th! The establishment will start serving guests in the Universal Studios Japan area next week and indicates the level of immersion we are expecting to see within the park. Enter Schwal’s Pharmacy with us and let’s check out all the details!

Eat on tables that look like little mushroom tops, stand on grass indoors, and start to enter the colorful world of Nintendo when you eat at this cafe. We also have a preview of some of the food and merchandise that will be available for purchase at the cafe!

Munch on Mario and Luigi-themed pancake sandwiches (check out the classic character tag lines placed on top!), a Super Mushroom drink in a souvenir bottle, and mustachioed fruit cream sodas that will let you become Mario and Luigi.

The merchandise we currently know of includes this t-shirt which sports classic symbols that look to represent Mario, Luigi, and Princess Peach.

There will also be a clear pouch with the same symbolic design, as well as a Super Mario keychain attached. Nintendo fans can also take the video game home pillow for on the Super Mario pillow which reads the classic ‘Whose Cap?’ We do not yet have prices, but more information is sure to come with an opening date only days away.

The Verge went on to say:

Super Nintendo World is Nintendo’s latest and biggest attempt to license its IP beyond video games. The park will use smart wristbands that pair with a mobile app and let visitors take part in a coin-collecting metagame, while there’ll also be traditional attractions — yes, including a Mario Kart ride. Universal Studios and Nintendo plan to open similar areas at the Orlando, Hollywood, and Singapore parks in the future.

This is very exciting for Universal Orlando Resort theme park goers as well! With the second Nintendo-themed land already confirmed for the latest theme park being built at Universal Orlando Resort: Epic Universe, fans can get a sneak peak of what to expect as Japan’s version opens next year. Epic Universe’s opening date has been put on a pause due to the pandemic, but seeing what we can expect once the park does open is surely enough to keep us patient for now.

Do you think Super Nintendo World will be the best theme park land? Let us know!