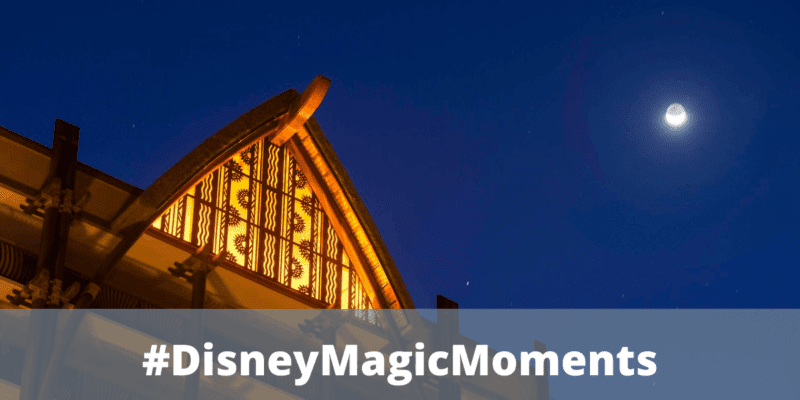 Spooky Season is officially in full swing, and Disney Parks has decided to treat us to some spooky Disney Magic Moments. This addition to the social media campaign has us looking up at some spooky moonrises at Disney resorts around the world.

When the sun sets, the moon’s silvery light can create the most enchanting – and breathtaking – views at our Disney parks and resorts!  Whether it’s moonbeams illuminating Spaceship Earth at EPCOT or framing up a tropical paradise at Aulani – a Disney Resort, each destination offers its own inspiration.

Tonight, our friends from across the globe are sharing some favorite Disney spooky moonrises to end your day.  Take a look at some Monday night “moon” magic:

Our special look at spooky moonrises begins at the Walt Disney World Resort where a beautifully rounded moon was photographed years ago delivering a bewitching glow to Spaceship Earth at EPCOT.

At Disney’s Vero Beach Resort, the water seems to dance in the moonlight during a starry night at the Disney Vacation Club location.

High above paradise, the moon shines brightly during a not-so-spooky night at Aulani – a Disney Resort.

At Disneyland Paris, the moon ushers in festive lights with decorations from Main Street U.S.A., to Sleeping Beauty Castle during the Halloween season.

A spooktacular moon is majestically mirrored in the water at another Disney Vacation Club location – Disney’s Hilton Head Island Resort.

At Disneyland Resort, beams of moonlight were captured adding a magical glow to surroundings.

And some not-so-spooky Halloween surprises were spotted during a moonlit night aboard a Disney Cruise Line ship.

We hope you enjoyed this special series of spooky moonrise views to end your day.  Be sure to check back for more Disney Halloween surprises by visiting our new “Everything Halloween” page.

Where is your favorite Disney location to watch a magical moonrise? Let us know in the comments!

Comments Off on #DisneyMagicMoments: Spooky Moonrises at Disney Resorts