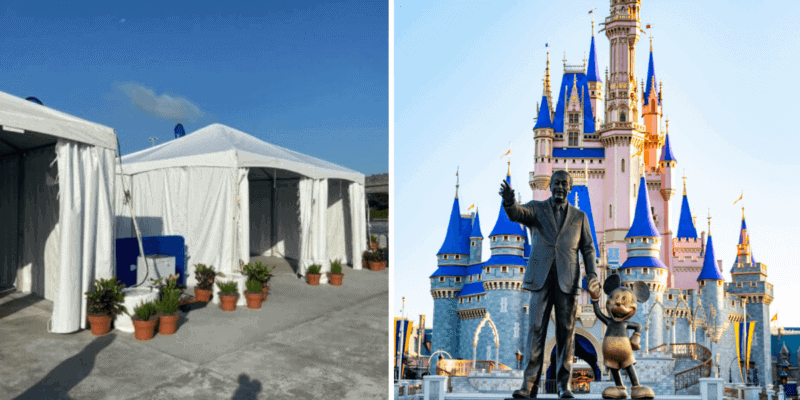 A woman was arrested outside of Magic Kingdom after she tossed her loaded handgun behind a planter before the temperature screening at the Ticket and Transportation Center.

The Guest — 27-year-old Marcia Temple from Georgia — told Orange County Sherriff’s Officers that her 6-year-old son should have been watching the gun.

According to the Orlando Sentinel, an employee who checks Guest temperatures prior to entry into the park said she spotted the woman taking something out of her stroller and putting it behind the planters by the temperature check tents. The employee then notified security, and security got in touch with an on-scene OCSO deputy.

Engwall found a pink purse containing the gun behind the planter. The 9mm gun was loaded with 10 bullets, including one in the chamber.

“Upon opening the purse, I recognized the butt of a firearm, readily accessible once opened,” the deputy wrote in her report.

That’s when Temple approached and said, “Ma’am, that’s mine.”

Engwall asked Temple why she had a gun at Disney World.

“I had told my son to hold it for me and stand right here” while she went to get her brother to take the purse and gun back to the car, the report quotes Temple as saying.

The deputy is reported to have found out that the woman, Temple, did not have a permit for a concealed weapon in Florida or her home state of Georgia. She was then arrested and banned from Walt Disney World property.

This is a photo of the temperature screening tents at the Ticket and Transportation Center where the Disney employee noticed the suspicious package being tossed in the planters.

This is not the first occurrence this year of a Guest being caught with a firearm at Walt Disney World.

In fact, we previously reported on a Guest being caught on Disney property with an AR-15. You can read all of the details of that occurrence at Disney’s Polynesian Resort here.

Disney sets out clear guidelines for Guests visiting Disney World about weapons and guns, and these are not allowed on any Disney property, regardless of whether or not a Guest has a permit. Read the official Disney  rules and guidelines on their website here.

Here is another list of restricted personal items from Disney to make sure you read and understand before your visit.