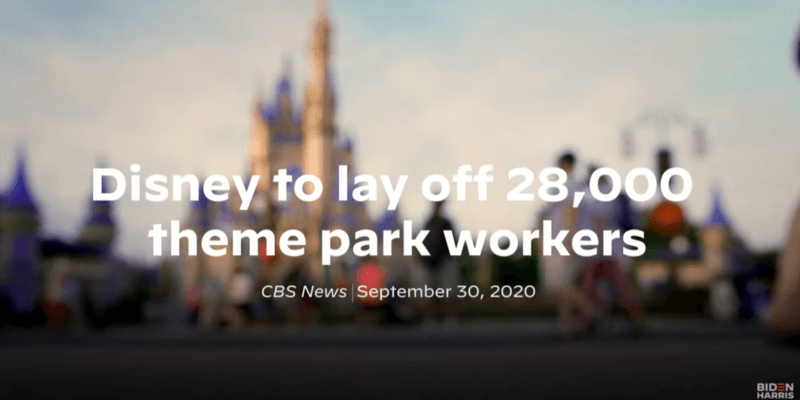 A new political ad for 2020 Presidential Candidate Joe Biden highlights the mass layoffs that are taking place at Disney Parks across the U.S.

In late September, Chairman of Disney Parks, Experiences and Products Josh D’Amaro announced that 28,000 Cast Members across Disneyland Resort in California and Walt Disney World Resort in Florida would be laid off. Today, Biden’s campaign released a new ad that features former Disney Cast Members who have lost their jobs as a result of the layoffs amid the ongoing pandemic.

“I’ve been working at Disney for 15 years,” says former Disney employee Bessie, who is featured in the ad. “The job gave me security, a paycheck to provide for my family and my mom. Seven months ago when we heard about this virus, we didn’t think that it was going to affect our jobs. Then we got the notice that we were going to be closing for two weeks, and then next thing you know we were being furloughed. 28,000 people from Disney got laid off. That’s 28,000 families.”

As she is addressing the Disney layoffs, Bessie then continues to say that she believes she would not have lost her job at The Walt Disney Company if the pandemic had been handled differently. During the rest of the ad, she advocates for Biden.

You can watch the full advertisement below:

“Over the past several months, we’ve been forced to make a number of necessary adjustments to our business, and as difficult as this decision is today, we believe that the steps we are taking will enable us to emerge a more effective and efficient operation when we return to normal,” Disney officials announced last month. “Our Cast Members have always been key to our success, playing a valued and important role in delivering a world-class experience, and we look forward to providing opportunities where we can for them to return.”

Our hearts go out to all of the Disney Cast Members affected by the layoffs. We will update our website with more information as it is released. Again, you can help laid-off and furloughed employees at this link here.