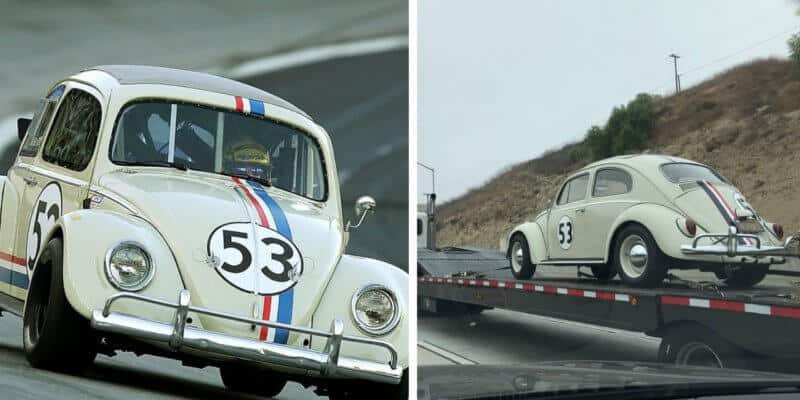 The fortune cookie on wheels, Herbie The Love Bug, has been spotted cruising down a Los Angeles highway!

Zack Stentz took to Twitter to showcase that he caught a glimpse of Herbie while he was driving and stated:

I’ve lived in L.A. for twenty years and this is by far the best celebrity sighting I’ve ever had.

I've lived in L.A. for twenty years and this is by far the best celebrity sighting I've ever had. pic.twitter.com/LhtLFlQNDT

And, it’s true! Herbie is a definite superstar and professional actor that all Disney fans love to catch a glimpse of. Everyone’s favorite prankster of a car has been in the Disney cannon of films for ages, appearing in:

Herbie used to even roll down Main Street, U.S.A at Disney World Resort’s Magic Kingdom park, until that version of the love bug took residence at Disney’s All-Star Movies Resort. If you don’t know about Herbie, Disney Fandom describes him as:

Herbie is a sentient, anthropomorphic 1963 Volkswagen Beetle featured in several Disney motion pictures starting with the 1969 feature film, The Love Bug. He has a mind of his own, is capable of driving himself and has been a serious contender in auto racing competitions.

We are not sure if this was just a replica version of Herbie that a fan may have made, or if this car actually belongs to Disney, but someone was definitely having it transported with precaution to its next destination. No matter what, seeing a classic Disney character is still an exciting sighting. I was wondering if the car could possibly be finding a home at Disneyland or Disney California Adventure, but with the recent news of Governer Newsom’s reopening guidelines likely having Disneyland Resort closed through Summer 2021, Herbie is not something we will be able to look out for unless he surprisingly shows-up in the Downtown Disney District. Again, this has not been discussed by Disney at all, but it would be a fun meet and greet to incorporate at Disneyland once the parks do reopen!

If there is ever a time I would not mind being stuck in LA traffic, it would likely be to see Herbie acting like a fool. Even if it means he is stuck on the back of a truck.

Would you want a Herbie meet and greet at Disney? Let us know!