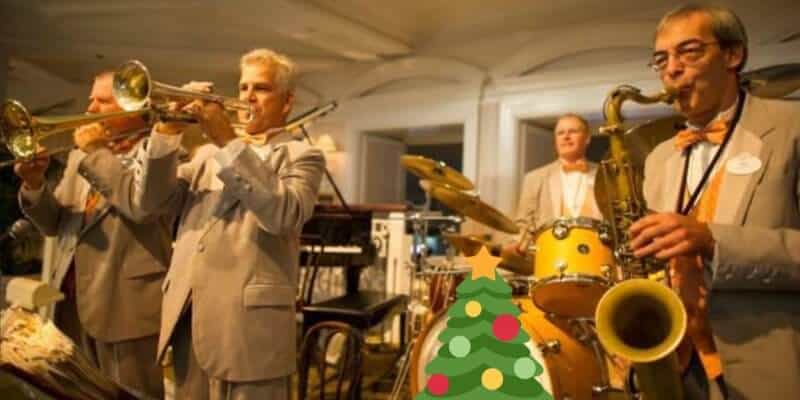 With Halloween just around the corner, that means it is almost time for Christmas and the holiday season! Disney World is almost magical during the “snoapy” winter season, but many of us will be missing The Grand Floridian Orchestra’s jazzy Christmas tunes bustling from the lobby of the Deluxe Resort — or so we thought.

Fresh off their 32 year run at a “grand” hotel in Florida, we are so proud to have the Jolly Creek Society Orchestra join our event as the headliner.

Catch them every event night at Jolly Creek beginning November 20!

Fresh off their 32 year run at a “grand” hotel in Florida, we are so proud to have the Jolly Creek Society Orchestra join our event as the headliner.

The cheeky response from Jolly Creek pokes fun at Disney and Disney’s Grand Floridian Resort, calling it a “grand” hotel in Florida, and also renaming the musicians at the Jolly Creek Society Orchestra, which is another poke at Disney, who renamed the group The Disney Society Orchestra after taking them out of the Grand Floridian and placing them in Disney’s Hollywood Studios theme park for a short run.

Just last month, we discovered that The Grand Floridian Society Orchestra would be disbanding from the resort as of October 3, 2020. This is one of the many Disney layoffs we have see during the pandemic, and unfortunately not the only entertainment offering that Disney has put on the chopping block. The group took to Facebook to announce:

It’s hard to find the words but, sadly, our days at the Grand Floridian are over. In fact, as of Oct 3, 2020, our days at WDW will come to an end as well.
The company brought us out of furlough, changed our name to “The Disney Society Orchestra,” closed us out of the GF to play a show of Disney themed show tunes at the Theater of the Stars in Hollywood Studios. We’ve been playing 9 shows a day, 7 days a week since Aug 2nd. The music is a far cry from the closely knit harmonies & sounds we became known for at the GF but. the guys are real pros and they sound great!
Well… Two weeks ago we got notice that the theater is going dark and our last day of work will be Saturday, Oct 3, 2020. As we all know, these are very uncertain times and can’t say what will happen from one day to the next.
So after 32 years of playing together and playing music we love… we’re done. We are so thankful for the opportunity to play in a beautiful setting for the hotel guests and friends we have met & made over the years. We’ll never forget you and how wonderful you’ve made us feel. We will miss you!
Thank you-thank you- thank you!
Related: Full List of Entertainment No Longer Available at Disney World

Since then, fans have created petitions to bring the boys back to Disney as once again, The Grand Floridian Society Orchestra. Although Disney has not changed their minds as of yet, it seems that other Orlando companies have seen the demand and are ready to cater to it!

So, as of November 20th, get your caroling voice ready and head to the Jolly Creek Winter Festival in Kissimmee to hear the magical sounds of the Jolly Creek Society Orchestra fill your holiday spirit!

Do you miss the Grand Floridian Orchestra as much as we do?