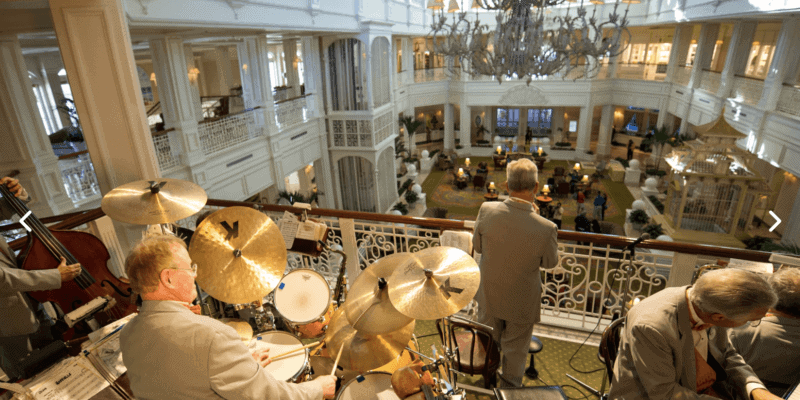 Earlier this week we reported that the Grand Floridian Society Orchestra was being removed from their post at Disney’s Grand Floridian Resort & Spa. Now we see fans are taking up for their long time favorite Disney world entertainers by starting petitions to help bring them back to the resort.

The Grand Floridian Society Orchestra has been performing at the hotel since its opening day and is part of the very fabric of the resort. I’ve often overlooked the shortcomings of the grand as a “real” luxury hotel and the pricing that comes with it because of things like the piano player and live band in the lobby. How Disney can fathom charging for what they do for this hotel a night while cutting such things is a joke. One room likely pays for an entire day of band performances.

The bandstand was lost for a seating area that is rarely used inside the overpriced Enchanted Rose—a bar themed to a European fairytale in a hotel called the Grand Floridian. If this is the direction the hotel is going, then Disney has made another IP-oriented, idiotic decision in a long string of such choices.

Here is a link to the petition on Change.org which already has gained 162 signatures!

Here is what this second petition describes its goals as:

Today we awoke to the devastating news that Disney plans to cancel the Grand Floridian Society Orchestra after 32 years. As a lifelong Disney fan and jazz musician, one of my absolute favorite parts of staying in Disney’s flagship hotel was the daily live jazz. All the musicians have been playing there for years, and were a huge part of what made the Grand Floridian feel GRAND. Waking up and hearing the orchestra outside your door was one of the things that really made the Floridian magical. Coming back from the parks, grabbing a drink, and enjoying their musicianship made the Floridian really special. Great big bands like that are becoming rarer and rarer to see, and sadly the Grand Floridian Society Orchestra will become just another statistic if we don’t act.

There is no reason at all for Disney to get rid of such a beloved icon. They are what sets the Floridian apart from every other hotel on property. I understand that COVID has caused incredible financial hardship for them, but there are other ways to cut costs without sacrificing guest experience. Musicians all throughout the country are struggling tremendously right now as it is, and it isn’t right to get rid of these talented players during this time.

Will you be singing these petitions for the return of the orchestra? let us know in the comments!

Plan your next Walt Disney World trip with our help!