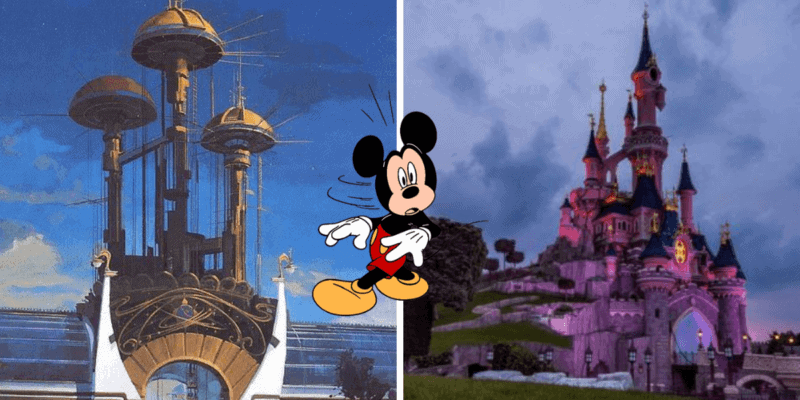 Most Disney fans agree that Disneyland Paris has one of the most breathtaking and unique castle designs across the Disney estate. However, a post from Redditor u/jillison_flook has revealed a fascinating piece of DLP concept art that puts it in a whole new light.

We all know that Disneyland Paris (formerly known as Eurodisney) incorporates steampunk elements based on the writings of Jules Verne. However, a Verne-inspired castle as the park‘s centerpiece would be absolutely wild and has to be seen to be believed.

Disneyland Paris is famous for its incorporation of steampunk iconography into the park‘s version of Tomorrowland: Discoveryland. Well, it appears that at one point in time, Disney Imagineers were possibly considering a steampunk aesthetic for much more than just Discoveryland.

This beautiful piece of DLP concept art below shows a castle that looks nothing like the final structure. Imagineers clearly wanted to be much more creative this time, particularly after Cinderella Castle was essentially reused for Tokyo Disneyland. Because of how many real castles are all over Europe, Disney wanted to create something fantastical for Disneyland Paris — but this Jules Verne-inspired version is way different than the whimsical Sleeping Beauty Castle the park ended up with!

The result is stylish and impressive. This monolith definitely would’ve stood out as a unique and imposing Disney park landmark. Check it out!

Disneyland Paris and the Art of Jules Verne

Disney’s Parisian theme park obviously didn’t end up going with this steampunk castle. It’s a shame in many ways, as everything about it is distinctive. No other Disney castle looks anything like the one in this concept art, with its bronze and blue coloring, otherworldly spires, and many protruding poles.

To say it looks nothing like Paris‘s Sleeping Beauty Castle is a bit of an understatement. The concept is entirely different, though we doubt that the castle depicted in the artwork would’ve ended up looking exactly like this!

Jules Verne is all over Discoveryland and the land is all the better for it. The timeless approach that Imagineers at Disneyland Paris took to representing the future means that Discoveryland will never grow old. Attractions like Les Mystères du Nautilus and The Orbitron give the land so much character and a really unique vibe. It’s a shame in a way that IPs like Star Wars are beginning to re-theme this classic land, but hey, that’s progress. For a little more insight into the creativity behind DLP, be sure to check out this amazing documentary with Imagineer Tim Delaney:

As for this DLP concept art, it will always be here to admire and wonder what might’ve been. We’d love to see what else Imagineers originally had in store for the Disneyland and Walt Disney Studios at Disneyland Paris in France!

From what we can find, the image appears to be taken from the book ‘Disneyland Paris: From Sketch to Reality’. If any reader owns the book and can confirm this, we’ll update the article.