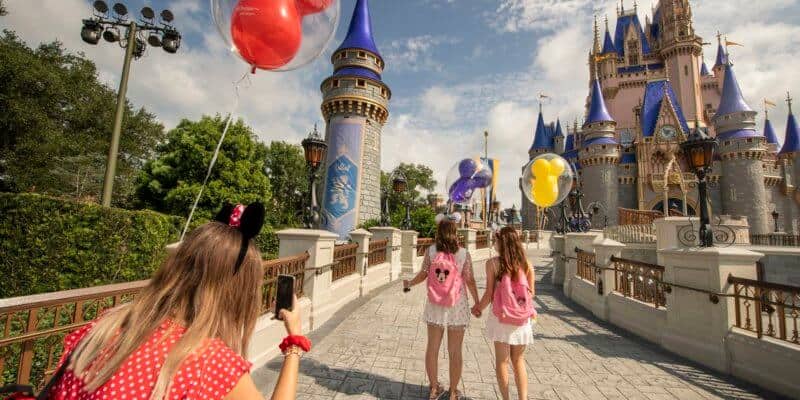 Walt Disney World Resort began a phased reopening of its theme parks on July 11. Just a few days later, all four theme parks at the Most Magical Place on Earth — Magic Kingdom, Disney’s Hollywood Studios, EPCOT, and Disney’s Animal Kingdom — had reopened their gates. There reportedly have not been any coronavirus outbreaks linked to theme parks in central Florida. But the pandemic is ongoing, more and more people around the U.S. (and the world) test positive for COVID-19, and many are left wondering:

Has the virus stayed away from Disney World?

According to The New York Times, Disney declined to disclose how many Disney World workers tested positive for COVID-19 since Walt Disney World Resort began its phased reopening.

The NYT did, however, reach out to some unions for more information. While not every Disney World employee is a member of a union, unions do represent thousands of Cast Members and have provided some insight regarding whether the virus has affected their members.

Unions representing Disney World Cast Members have confirmed that there have been no COVID-19 outbreaks among WDW employees or Guests. Here’s what they shared with The New York Times:

“We’ve had very few, and none, as far as we can tell, have been from work-related exposure,” said Eric Clinton, president of UNITE HERE Local 362, which represents roughly 8,000 attraction workers and custodians.

Mr. Clinton’s assessment was echoed by UNITE HERE Local 737, which represents hotel housekeepers and food and beverage workers; Local 631 of the International Alliance of Theatrical Stage Employees, where members include stagehands and show technicians; United Food & Commercial Workers Local 1625, which handles merchandise and banquet workers; and Teamsters Local 385, which looks after bus drivers, laundry workers and entertainers who appear in costume as Disney characters.

“So far — so far — it has been a success story,” said Julee Jerkovich, a United Food & Commercial Workers official. “As a union rep, I do not say that lightly.”

Dr. Raul Pino, director of the Florida Department of Health in Orange County, has echoed these statements. He shared, “We have no issues or concerns with the major theme parks at this point,” something that has been consistently stated during the Orange County coronavirus updates.

Even Disney Parks officials are contributing to the narrative that Disney World has been a success story when it comes to operating during a pandemic.

“Our health and safety protocols were developed in consultation with epidemiologists and data scientists, and after considering guidance from the Centers for Disease Control and experts in local government and health agencies,” said Disney Parks Chief Medical Officer Dr. Pamela Hymel.

“Our processes are thorough and guided by Disney’s team of health and safety professionals, as well as other experts [like epidemiologists],” said Elizabeth Mullins, Vice President, Walt Disney World Hotels & Resorts, during an update on Disney Parks operations last month. “Our cast is glad to be back, doing what they do best: making magical and memorable experiences for our guests.”

But note that Disney has not publicly stated the number of Cast Members who have contracted COVID-19 since the theme parks reopened in July (the Disney Resort hotels began to reopen in June, and Disney Springs reopened in May). So even though it is possible there have been no cases of the virus linked to Disney World, it cannot be ruled out completely.

“Just because we don’t have ample evidence of it happening — yet — doesn’t mean it’s not happening,” said Dr. Anne W. Rimoin, an epidemiology professor at the Fielding School of Public Health at the University of California, Los Angeles. “There is simply no zero-risk scenario here. When you create opportunities for large numbers of people to come together, you are providing opportunities for the virus to spread.”

Still, it’s highly important to keep in mind the possibility of getting COVID-19 when you visit a theme park like Disney World. It’s true that temperature checks are required for all guests before entering the parks, face coverings must be worn by everyone ages two and up, social distancing measures are in place, plexiglass has been installed (at registers, in ride vehicles, and in other areas where distancing isn’t as possible), and frequent sanitization is being implemented.

But there is no guarantee that when you visit a Disney World park you will not get this virus. That is why Disney has been warning Guests of every Disney property that an inherent risk of COVID-19 exists in any public place — Disney World included.

The Walt Disney World official website — as well as a pop-up message on the My Disney Experience app — states the following:

We have taken enhanced health and safety measures–for you, our other Guests, and Cast Members. You must follow all posted instructions while visiting Walt Disney World Resort.

An inherent risk of exposure to COVID-19 exists in any public place where people are present. COVID-19 is an extremely contagious disease that can lead to severe illness and death. According to the Centers for Disease Control and Prevention, senior citizens and guests with underlying medical conditions are especially vulnerable.

By visiting Walt Disney World Resort, you voluntarily assume all risks related to exposure to COVID-19.

Let’s keep each other healthy and safe.

We’ll continue to update Inside the Magic as more information regarding the pandemic and Walt Disney World becomes available.

Comments Off on Has the Virus Stayed Away From Disney World?