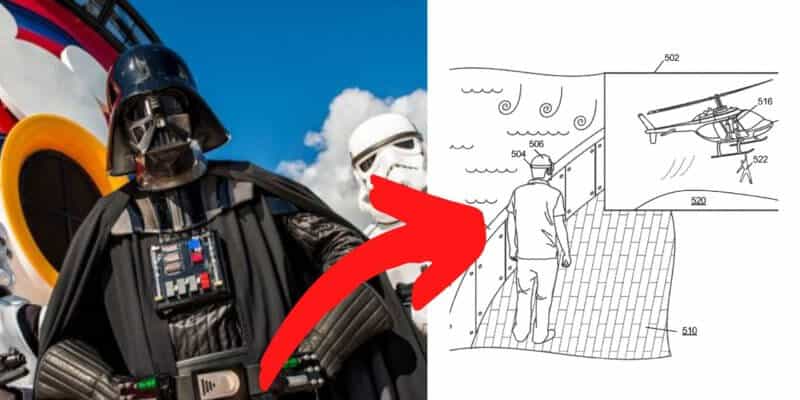 Disney is always innovating and imagining the next idea or latest technology that can allow Guests to fall deeper into their magical immersion. From the lands they create such as Pandora: World of Avatar to Star Wars: Galaxy’s Edge, every single detail including the tiny markings of the ground all work together to make you feel, as our favorite Grandmother from Carousel of Progress would say, “I feel like I’m really there!”.

And that little comparison flows nicely into the new technology we are going to discuss today. When Grandmother and Jimmy are at the dinner scene in Carousel of Progress, she is able to ‘feel like she’s really there’ because of the VR system she is using. This is exactly what Disney is working on, but a little more high tech than asteroids.

Disney just filed a patent for “SYSTEMS AND METHODS FOR ENHANCING ACCURACY OF SPATIAL LOCATION AND ROTATIONAL ORIENTATION DETERMINATION OF WEARABLE HEAD-MOUNTED DISPLAY DEVICE”. And if you need that translated into English, it’s basically a VR system that will allow your surrounding movement to correlate directly with what you are seeing in front of you on the virtual reality headset.

The best comparison I can think of would be the same technology we experience on Avatar Flight of Passage with the screen placing us in at an aerial view of Pandora, with our sets moving they allow us to feel like we are flying on our Banshee. This VR technology would work to combine a virtual visual video with the movements we experience on things that are more based in reality, such as a car, walking, or a cruise ship. These are things we do not have the same control since they are not a pre-set ride vehicle but the technology would adapt to the movements to make sure what you are seeing matches how you are feeling.

The patent filed by Disney discusses how it can be used on any motor, aircraft, and water vehicle:

To see virtual reality happen on a coaster vehicle would be super cool, but to have it happen on a cruise ship would be even better. Disney Cruise Line can’t have epic attractions on board like the Tower of Terror, so why not find another way to make Guests feel like they are being transported?

Although Disney has not mentioned that this will be coming to Disney Cruise Line (DCL), the patent highlights both cruise ships as an example ship, and then uses a cruise deck as a demonstration on how the technology works. The patent discusses how the VR user could be on a cruise ship deck watching a helicopter take off, and the feeling of the ship at sea would act as the attraction vehicle allowing you to have all senses stimulated. This idea seems like the perfect solution for Disney Cruise Line not being able to have theme park attractions on the ship since it eliminates the need for a ride vehicle. It would be interesting to see this VR technology incorporated into Disney cruises that have Star Wars Day at Sea, where Guests could experience a Star Wars VR attraction while aboard the ship.

For now, we just know that this technology is being developed, and it will be exciting to see where it can lead in the future — so long as the motion sickness doesn’t get the best of it!

Would you want to do VR on a Disney Cruise? Let us know!