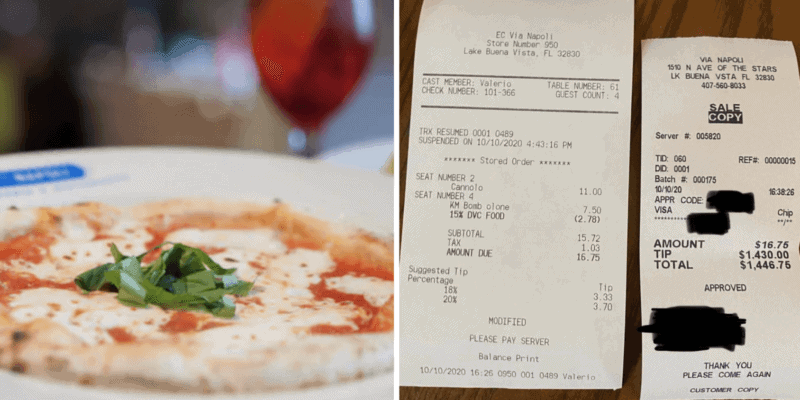 Earlier this year, a Walt Disney World Resort Guest — who also happened to be a travel agency owner — refused to tip a server at Via Napoli in EPCOT’s Italy Pavilion.

Related: A Complete Dining Guide To EPCOT in Disney World

Ultimately, the unfortunate situation went rather viral online, with many Disney fans going to bat for the EPCOT server, whose name is Valerio. Since the incident originally occurred, the Cast Member has received nearly $2,000 via a tip as well as a GoFundMe.

Your Mileage May Vary has shared an update about Valerio since the “no tip” situation occurred. They wrote:

There’s a Facebook group called DisFoodies where members talk about, what else but, food at Disney parks. When the group owner, Sam C., heard about what A.S. had done to Valerio, he started a fund for him and asked his members to chip in if they’d like. The plan was that they’d give the money to Valerio when Sam and his family ate at the same restaurant, Via Napoli, on October 3rd. Thanks to DisFoodies’ members’ generosity, Valerio got a $250 gratuity on that $116 bill.

Your Mileage May Vary’s article continued with this story:

…another Disney fan, Kyle G., heard about what A.S. [the Guest who didn’t tip] had done and started a Go Fund Me for Valerio. That link went far and wide.

On October 10, Kyle and his party also ate at Via Napoli and planned it so they could have Valerio as their server. The bill for Kyle and his family was $16.75, and they tipped him a whopping $1,430!

We did it! Thanks to the 98 people who helped raise $1,415 to make up for those who decide to not tip their servers. Please check out @castmemberpantry and Magic for Magic Makers on tiktok to keep supporting Disney Cast Members! Thank you to Valerio and all of the other @vianapolipizza Cast Members as well! #disdadmania #disdad #disneydad #vianapolipizzeria #epcot #disney #tipyourserver #thankyou #gofundme

He wrote, “We did it! Thanks to the 98 people who helped raise $1,415 to make up for those who decide to not tip their servers. Please check out @castmemberpantry and Magic for Magic Makers on tiktok to keep supporting Disney Cast Members!”

What do you think about these Disney fans’ generosity amid Valerio’s Via Napoli tip troubles earlier in the year?