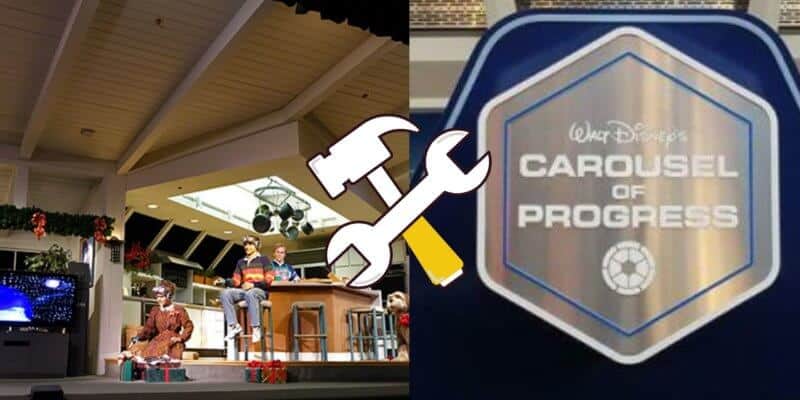 Disney World is always ever-changing, with new permits being filed nearly every day for improvement work, electrical work, and other generalized construction work for various locations throughout Disney property.  We can now add Carousel of Progress to the mix of attractions that will be having some sort of construction work being done.

Buena Vista Construction Company recently filed a permit at 1205 Monorail Wy, which is the location of the beloved Carousel of Progress at the Magic Kingdom in Disney World. The permit states that the attraction construction is meant to “provide labor, material and/or electrical for construction”.

Although we have not heard of any closures to the attraction, the permit does indicate that changes will be made to Carousel of Progress, though they could be minor improvements. We have had instances of the show’s main narrator and starring performer, John, having his hand fly off mid-show. Considering Carousel of Progress has had more showings than any other American stage show, it makes sense that the show could use some tweaks here and there — I mean, we do travel an entire century within 20 minutes, it’s a lot of work!

Could Carousel of Progress see a complete refurbishment?

Carousel of Progress has been around for a very long time. From its conception at the World’s Fair until now, the storyline has shifted, new voice actors have been added, but one thing has always been the same and that’s the idea of progress. So for an attraction that deals so heavily with the idea of moving forward and innovating, just like Walt Disney, it is odd at times that the attraction is now dated for a 2020 audience.

In the final scene, we get to see what the future looks like, but as a society, we have already moved past the technology displayed. With that being said, and considering changes have been made in the past, it wouldn’t be out of left field to have the attraction updated.

However, it is very important to keep in mind that Disney has not stated any sort of refurbishment or “reimagining” of the attraction. Also, as we mentioned earlier, there is no extended upcoming closure for the attraction so a serious overhaul does not seem likely.

From a personal standpoint, and as a Guest who’s favorite attraction is Carousel of Progress, I hope to not see huge changes come to the attraction anytime soon. The attraction acts as a time capsule of it’s time, and although one day it may need to be updated, I would like to see John burn the Christmas turkey from his automated oven a few more times.

Do you think Carousel of Progress needs to be refurbished? Let us know!

Click here to book your next Disney World vacation!