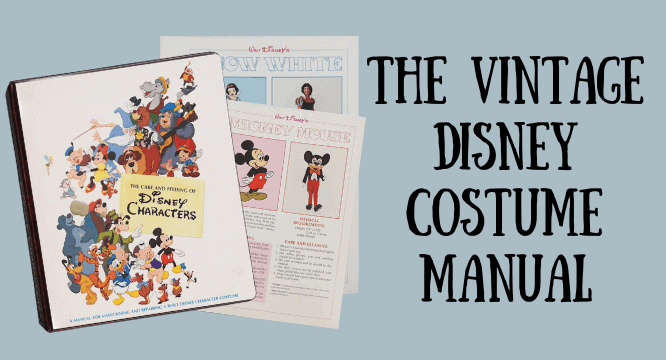 An unearthed treasure from the Disneyland backlog of history has recently made light again. A 2015 auction from iCollector.com shares a Disney Costume Manual called, “The Care and Feeding of Disney Characters” that discusses the proper way to dress as a Disney character, the order in which to dress, as well as care for costumes, accessories, and wigs.

The visual menu of Disney characters is fun to look back on, and find the similarities to the present. Not to mention the incredible look backstage is quite magical!

The Care and Feeding of Disney Characters: A Disney Costume Manual

The 1977 Disney Costume Manual was found for sale on iCollector and had a short description:

“Extremely rare 5-ring binder containing information on the wearing, care, and maintenance for each costumed character in the park. An astounding reference book full of photographs and information. In fine condition.”

The costume manual SOLD on March 1, 2015, to someone present at the auction for an undisclosed price. We may never know the true worth of this personal treasure! We were tipped off on Twitter by @Figment_Jedi who shared a few snaps of the manual image.

Inside the Cast Member manual, we see a cute internal cover with plenty of Disney Parks characters disembarking from a plane. Snow White, Donald, Mickey, Little John, Tweedle Dee & Dum and more flow down the stairs to welcome us into the book.

Each character page has two photos; one animated illustration and the Disneyland Park manifestation in physical costume. This is the end goal of the Cast Member’s appearance. CMs are guided with a small paragraph about character and origin and then are given physical requirements or guidelines necessary for the costume’s fit.

Next, how to dress as the character and what order to put on the costume items is listed. Each costume item is written in capital letters. On the right side, the Care and Cleaning of the costume or wig are mentioned, in great detail. This would have been for wardrobe’s use. In modern times, a barcode system is used to check costumes in and out between Cast Members. Below is an example of an extracted Mr. Smee page.

While we can’t see every page of the costume manual listed for sale, there are several character dressing pages we can view. Our very favorite DIsney character, Mickey’s height requirements look to be from 4’9″ to 5’2″, needing the most petite of mouse figures. Those caring for the Mickey Mouse costume need to brush him before and after each use and make sure his tap shoes are in working order.

Pluto, our favorite pooch, doesn’t look too much different from our modern times. Clad in yellow fur, Pluto should be brushed daily and made to wear tap shoes, too! We want to hear his little paws coming our way! It’s noted that Pluto’s dog claws are sharp and can possibly scratch a park Guest if the Cast Member is not careful!

Who gets stuck with all of that luck? No one, but Donald Duck! Donald comes in at a moderate height for women, between 4’4″ and 4’8″. There are a few layers to Donald’s fur character costume that should be worn in the right order to appear correct.

The most kind of the Disney Princess lineup, Walt’s first princess appears in the flesh at Disneyland in 1977, looking much like this. The first face character in the book, Snow requires a wig (see the wig section below) and has a very specific way to put on the dress. There are more parts than you think!

She tries to follow her own advice, but ends up falling down the rabbit hole anyway. Alice is prim and proper in her iconic blue dress and white pinafore. Matching black shoes and headband cap off the outfit. It’s noted that the wig is a definite part of Alice’s look and at no time should she be seen without it.

Pooh Bear from the 1970s and before is very odd! A naturally short-statured bear, the Disney Parks initially gave the illusion of Pooh’s shortness through a honeypot stacked on top of his head. The Cast Member inside needed to be 5’8″ to 5′ 10″ in order for the honeypot to serve as a headpiece.

The Three Little Pigs were dressed fairly similarly, and it should be noted that skinny legs appeared thin next to the large costume head. Simple tall pink socks were used in lieu of an entire body costume. The Pig’s head needed to be softly removed and laid on a pillow when not worn.

This little wooden boy looks more lifelike in this Disney Parks costume manual! A slender build and rather short height suggest a youthful appearance, partnered with tights, a leotard, gloves, and a mascot head.

The Care and Cleaning Manual for Disney Wigs

What’s very interesting in this manual are the pages dedicated to wigs! Below we see Alice, Peter Pan, and a very elegant Cinderella in detail. Both fronts, side, or backs of the wigs are seen and strict washing and setting guidelines are listed. It’s noted that only qualified beauticians or cosmetologists should be handling the wigs’ care and cleaning.

Which Disney character do you want to dress up as? With pages from this Disney Costume Manual, you’d be dressed for success in no time. Leave us a comment below!

Comments Off on The Care and Feeding of Disney Characters: A Disney Costume Manual