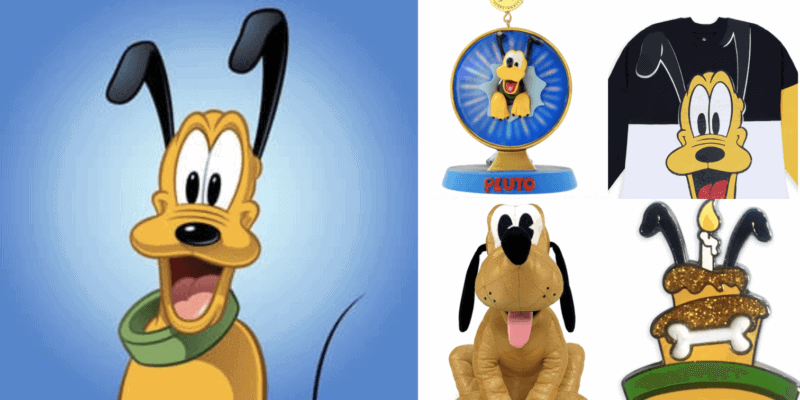 Pluto first appeared in a Walt Disney cartoon as a nameless bloodhound tracking Mickey (who played an escaped convict) in the The Chain Gang (September 1930). In November of that year, the now beloved Disney dog showed up in The Picnic as Minnie Mouse’s pet, Rover. Pluto’s first major appearance with his final name was in the 1934 cartoon Playful Pluto.

This limited edition Pluto Christmas ornament features the iconic pooch jumping through a hoop, a popular trope in early cartoons.

From the side, the resin ornament pays tribute to Pluto’s original black and white animation style. We love how this Disney ornament honors the history of Walt Disney Animation Studios in such an adorable way.

The next item in the Pluto’s 90th collection is this new Disney spirit jersey. The front of the shirt features the smiling character and the back reads simply “Pluto” in oversized letters.

Details from the official shopDisney description include:

This adorable plush Pluto is the perfect collectible to celebrate the pup’s 90th birthday next month! Sitting 13 inches tall, it is ideal for displaying or for giving to a child as a special companion!

Details from the official shopDisney description include:

Details from the official shopDisney description include;

Which Pluto’s 90th Anniversary merchandise do you like best?

Comments Off on Pluto Turns 90! Celebrate With NEW Merchandise