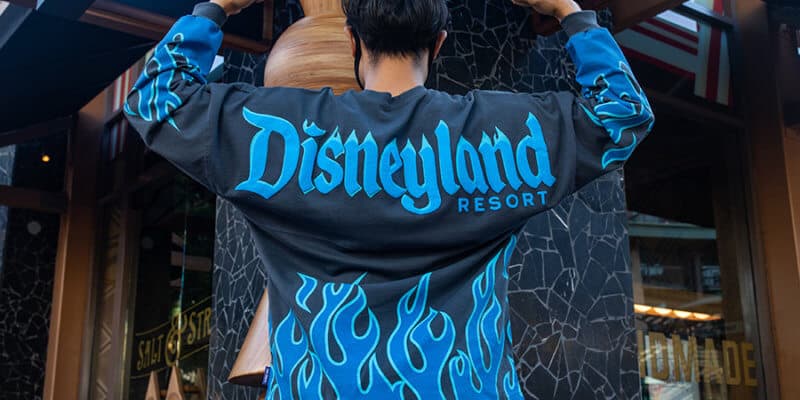 Good Morning America had the exclusive that new Villainous merchandise was to be added to the Disney lineup at Halloween. We reported on the sneak peek of a few women’s silhouettes and accessories, but now a new Hades Spirit Jersey is rising up from the underworld in time to start the season. Check out the evil colors photographed at Disney Springs!

On Instagram as well as Twitter, Walt Disney World’s posts have been getting very spirited. A new short video shares some of the looks we’ll see at the local World of Disney stores as well as online at shopDisney.com (Disneyland version). The post reads,

“Choose your spooky look and check out all the new Halloween-themed products coming this month to @DisneySprings at the #WaltDisneyWorld Resort & @shopDisney! Head to the @DisneyParksBlog for more”

The video is short and quite fun, and we see a lot of the new Halloween villain merchandise come and go. Since haunted spirit jerseys are always the hype, our eyes were glued to the new unisex Hades Spirit Jersey shirt. It’s pretty certain that we will also see a Walt Disney World version, as this evil dude in villain gear sports a Disneyland Resort version. Disney‘s Hercules doesn’t often get much love, and seeing the hype surrounding Hercules’s visit to a Disney Park, we’re not surprised to see more of the underworld god this Halloween season.

Either way, the cool blue flames licking up the sleeves and eating the bottom hem are quite a nice touch to the typical purple and burgundy Disney villain color palette.

As far as matching accessories go, there is a new matching evil greek god “ear headband” featuring a plume of electric blue faux fur on a velvet lined headband. Hades’ name is etched on one side with his poison logo just surfacing below it. These two pieces would go well together for an easy Disney character costume during evening festivities!

Other evil spirit jerseys have made the scene this year like the coveted new Hocus Pocus character look which immediately sold out, and the Haunted Mansion wallpaper top with it’s cadaverous pallor. Some may continue to be available in the Magic Kingdom theme park shops (or Disney Springs‘ World of Disney store), but the increased Annual Passholder discounts helped moved more items than normal from online shelves.

Available soon, the Oogie Boogie Nightmare Before Christmas Spirit Jersey will keep you warm on those cool Halloween nights, allowing you to practically twin with the popcorn bucket of years past.

We’re loving the lesser-seen villains coming out to play this Halloween Season (Check out the runDisney Wine and Dine themes)! Do you think it’s about time Hades got his merchandise moment? Leave us a comment below!

Comments Off on Villainous Hades Spirit Jersey Rises Up