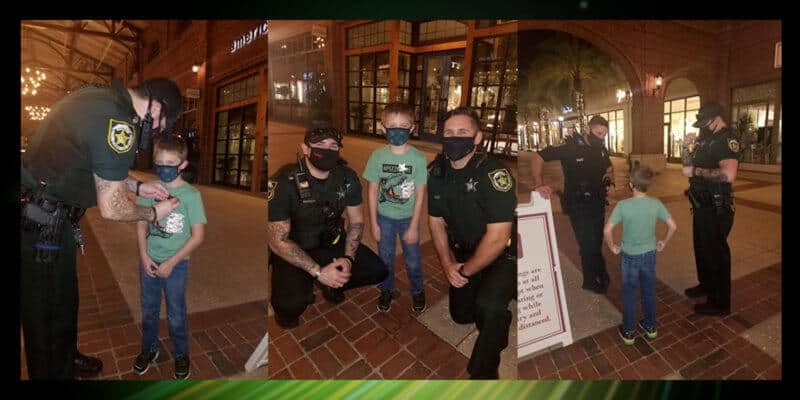 Even though it may not be its official slogan anymore, the Walt Disney World Resort still finds a way to be the place “Where Dreams Come True.”

Inside the Magic has just learned of one little boy’s dream that came true back in September. The official Twitter account of Florida Sheriffs shared the story of nine-year-old Alex who is battling brain cancer and has dreamed of becoming a law enforcement officer since he was three.

During a night in Disney Springs on his Disney World vacation, two Orange County Sheriff deputies presented Alex with his very own badge.

Alex is 9 years old and is currently fighting brain cancer. He has always dreamed of becoming a law enforcement officer. @OrangeCoSheriff Deputies Ryan Ouellette & Nicolas Stowe met Alex at Disney Springs in September and gifted him with his very own badge. #StarOnTheStreet pic.twitter.com/H6Et2DxXaq

The full story was shared on the Orange County Sheriff’s Office Facebook page and reads as follows:

Nine-year-old Alex is fighting brain cancer and last week was the first time in six months without a doctor’s appointment, blood work, or chemotherapy.

To celebrate, Alex’s parents, both University of Central Florida grads who now live in Punta Gorda, brought him to Walt Disney World.

Deputies Ouellette and Stowe gave Alex a badge with his name on it.

“They made his night,” Alex’s mom told us.

The news for the past week has been dominated by layoffs, the apparent elimination of in-park Disney World entertainment, and the re-closure of another Disney resort. My personal hope in sharing this story with you all is that you will see despite the struggles and the sadness, the magic is still alive on Walt Disney World property dreams can still come true, and we can find the inspiration to keep fighting for those dreams.