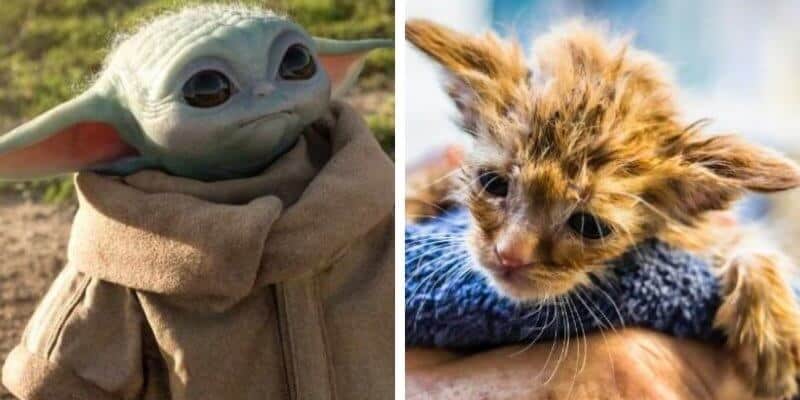 “The Force is strong with this one” – Master Yoda

Among all the powerful creatures in the galaxy, and the terrible darkness of California’s fires, who would guess that a little baby kitten would be the one with The Force?

A tiny cat, about 2 to 3 weeks old, was rescued by firefighters last week in a Northern California wildfire. The little baby is super cute, but what caught people’s attention and made the story go viral on social media was the fact that the little feline bears an uncanny resemblance to Baby Yoda from the Disney+ Star Wars: The Mandalorian series!

Related: Disneyland, The Happiest Place on Earth For.. Cats?

The poor kitten who bears a strong resemblance to The Child was found in the middle of the road, covered in smoke and ash. According to the post made by the North Valley Animal Disaster Group on Facebook, the baby was rescued and taken to the Cal Oak Animal Shelter.

At the animal shelter, her — yes, it’s a she — little stature, enormous ears, and big black eyes landed her the name of the Mandalorian character she resembles — “Baby Yoda”.

“As of last night, her foster has said she is doing great,” North Valley vice president Norm Rosene told CNN on a September 26th interview. “Baby Yoda will have no problem finding a home.”

Right now, Baby Yoda is safe and sound under the care of her foster family with no need to use of her Force powers again.

Of course, there have been a flood of requests to adopt Baby Yoda, but, like for every other pet found by rescue groups battling the wildfires in California, Baby Yoda will stay for a month under the shelter’s care in case she has a family out there looking for her. If not, she will be adopted and live happy the rest of her days in a galaxy far far away from fires!

Do you think kitten Baby Yoda resembles the now-iconic The Mandalorian character? Let us know in the comments below.

Comments Off on ‘Baby Yoda’ Kitten Rescued From California’s Wildfires