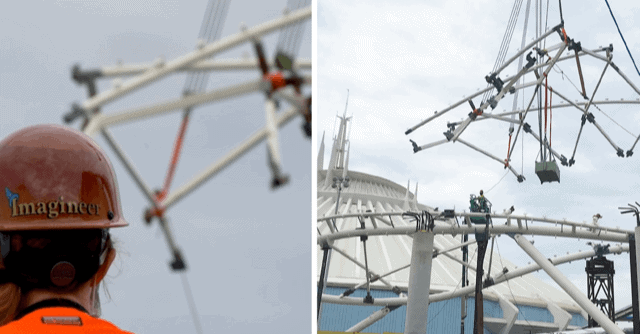 As guests gaze upon the Magic Kingdom skyline today, it might include a big difference! The Disney Imagineers have begun constructing the grand canopy that will surround the TRON coaster attraction. The first piece of a series of about 40 pieces that will form the curved wave canopy that will be known as the Upload Conduit.

During the course of the construction site, each section of the TRON Lightcycle Power Run Coaster is carefully and strategically assembled before actual installation. According to Disney Parks, this includes the alignment of the steel, welding, grinding, painting, and electrical work. With this recent update, guests can really see the eventually complete shape start to take place and really take form.

Disney Parks also had this to say about the newest development:

This canopy will be a massive, awe-inspiring structure flowing organically over you when you race beneath it aboard your Lightcycle, serving as a digital bridge for your transition into The Grid. As the Lightcycles whiz by, dynamic stripes of lights will follow along the canopy, creating a powerful visual for riders and bystanders alike. Just wait until you see this at night … it will be spectacular.

The TRON Lightcycle Power Run coaster has come a long way since it was originally announced during last year’s D23 Expo. At first, as fans, we only had the concept art and it’s sister attraction in Shanghai to really paint the picture in our minds. Then, as construction began in Tomorrowland at the Magic Kingdom, the anticipation only grew! Now, guests will have to wait until Walt Disney World’s 50th anniversary in 2021 to experience this exciting and thrilling attraction!

Related: Take a look at the video of the latest construction update for the TRON Lightcycle Power Run Coaster on the Disney Parks Website.

Will you making the trip to ride this attraction in 2021? Let us help you with your vacation planning!