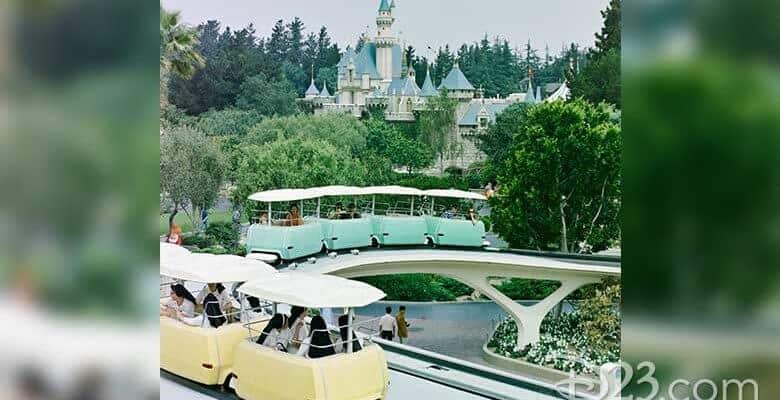 A petition on Change.org is calling upon Disney to re-install the PeopleMover to Disneyland’s Tomorrowland.

Many Disney Park enthusiasts often have a hard time letting go of the past. However, that’s a good thing when it comes to extinct or abandoned attractions located in Disney Parks worldwide.

Several extinct attractions, like Horizons and Body Wars from the original EPCOT Center, have gained a cult following since the rise in popularity from YouTube channels showing the remnants of these forgotten gems.

Fans have recently come together once again to petition for the iconic PeopleMover to return to Disneyland’s Tomorrowland in Anaheim, California.

The Change.org petition “Bring Back the Disneyland Peoplemover” states:

“My dear friends, it is with great sadness that I must repeat again that we have been without the Peoplemover for 25 years, since 1995. It was devastatingly replaced with the Rocket Rods which destroyed its track and the ride’s history. I think it is time, we are in a new era, we must bring back the Peoplemover… Bob Iger, an angel to the Disney community, bring back what the fans love before your time as CEO comes to an end. Please sign the petition to help bring back the Peoplemover once and for all!”

The PeopleMover track still stands within the interior of Tomorrowland, reminding fans of all generations what once stood there. Now above what’s known to be stroller-central, these tracks stand abandoned.

However, could those tracks be brought back to life?

History of the PeopleMover

With it’s a small world, Great Moments with Mr. Lincoln, and the Carousel Progress (now in Walt Disney World) finding a home in Disneyland after the 1964-65 New York World’s Fair, Walt Disney was ready to update Tomorrowland like never before.

Often referred to as the “highway in the sky,” the Goodyear PeopleMover opened with New Tomorrowland on July 2, 1967, with the Rocket Jets (now Astro Orbitor), Carousel of Progress, and Flight to the Moon.

Utilizing the conveyor system from the Ford Magic Skyway used during the 1964-65 New York World’s Fair, guests boarded small-car trains that ran on an elevated track for a “grand circle tour” throughout Tomorrowland.

The PeopleMover traveled through Tomorrowland attractions like Adventures Thru Inner Space (now Star Tours), Star Trader, Starcade,  and eventually Space Mountain in the summer of ’77.

Guests could wave at the mermaids in the Submarine Voyage Lagoon and soar above the Autopia roads all in one sitting!

The PeopleMover cars were continually moving due to rotating Goodyear tires, placed in the track once every nine feet, propelling the vehicles forward. What now stands as an abandoned circular tower used for lighting was the rotating platform station used for the attraction.

The PeopleMover was a serious prototype for intercity public transportation and a solution to traffic problems.

This “highway in the sky” transported guests to the entrance of Tomorrowland, to the Matterhorn, riding along the Monorail tracks, and then back to the center of Tomorrowland.

The D-ticket attraction was a fan-favorite for many. Tired guests could rest their feet during the 10-minute duration of the ride while still enjoying the Happiest Place on Earth.

On August 21, 1995, the PeopleMover unexpectedly closed to make way for the new Rocket Rods.

The tracks sat vacant for three years until 1998 when the short-lived Rocket Rods took its place.

As apart of Michael Eisner’s program to save money by shutting down expensive shows and attractions, the PeopleMover left the Tomorrowland tracks forever.

Once onboard the unusual 5-seat Rocket Rods, guests zoomed through Tomorrowland at speeds of 35 mph!

The attraction displayed the future of rapid transportation, but the ride faced numerous technical difficulties.

Due to structural damage caused by the Rocket Rods’ high speeds and sharp turns, the track could no longer support the vehicles.

Caring more about thrill than education, the Rocket Rods put the PeopleMover past its structural limit.

Only being open for two years, the Rocket Rods closed in September of 2000.

Legacy of the PeopleMover

In his book, Designing Disney: Imagineering and the Art of the Show, Hench explained:

“In Tomorrowland the view from the Submarine Lagoon was dedicated to action, an orchestration of movement, including the aerial Skyway, the surface-level Autopia, the elevated Monorail and PeopleMover, and the underwater and surface Submarine Voyage.

“These were all woven into a pattern looping through, around, over, and under each other. The vehicles were streamlined forms with modernistic lines that implied movement. The entire area was staged kinetically to suggest the energy of modern urban life.”

Fans and Imagineers alike have an affinity for Tomorrowland, especially Tomorrowland ’67-’77- the “perfect decade.”

“Walt was always looking for inventive new ways of moving guests around.”

“Imagineers considered the track layouts and structures to be as much design elements as the vehicles, and intended them to convey the same meaning. On the PeopleMover, the structural forms are designed to support physical forms in motion… The shapes are organic, with softened and tense edges that look like muscles, expressing movement. The streamlined look was efﬁcient, but also beautiful.”

Future of the PeopleMover

Flash forward 20 years later, and the tracks are still vacant.

In 2010, during a Destination D event, then-President of Disneyland Resort George Kalogridis revealed there were plans to renovate the PeopleMover track and bring back the attraction, stating:

“‘Everyone understands the passion everyone has for it.’ He additionally stated, “‘Hang in there.'”

Many longtime fans and Disney historians are still hanging on, but there are no signs that the PeopleMover will return soon.

Could the PeopleMover ever return to Disneyland park in Anaheim? In theory, yes!

But in dollars, it’d take a few million- maybe even more.

You see, to bring back the PeopleMover requires an entirely new track and operation system as the current one is highly out of date and unstable. On top of that, attractions (Space Mountain, Buzz Lightyear Astro Blasters, etc.) with PeopleMover track will need to close and have track replaced.

With whispers and rumors regarding a multi-year Tomorrowland update, the PeopleMover could return.

Until then, keep on wishing and dreaming! It will happen one day soon.

Do you think the PeopleMover will ever return to Disneyland? Did you get to ride it back in the day? Let us know in the comments!