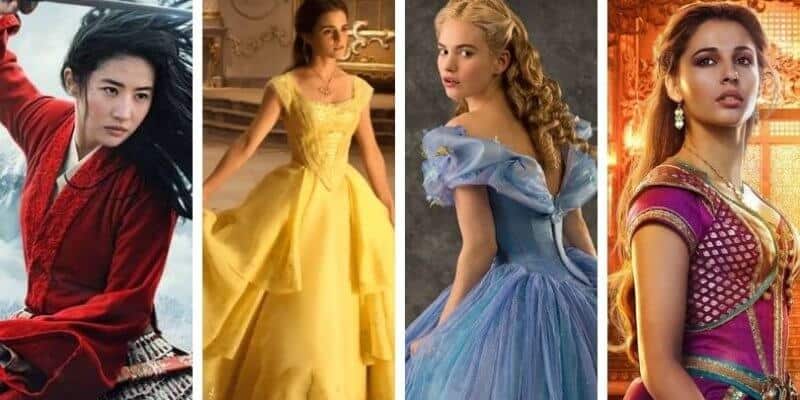 If you were born anywhere after 1990, there is a chance you grew up as a Disney child. Well, I certainly did! By the beginning of the decade, Cinderella, Snow White and Sleeping Beauty were already out, with Aladdin, The Little Mermaid, Beauty and the Beast, Pocahontas and Mulan following one after the other. Now with the new Disney live action films, the original Disney Princess has changed.

Disney was everywhere, and the company became the reference in children animation worldwide. I have vivid memories of growing up (I was born in 1995) watching Snow White, Cinderella, The Little Mermaid, etc. I watched all Disney princess movies, over and over again. My Disney VHS tapes were used so many times, that by the time DVDs came around, the videotapes were falling apart!

Even today, I love the classic Disney princess animations! Yes, I am very aware that there are several aspects to the classic Disney stories that aren’t as accepted by society today, compared to back when the films where created. Some aspects, are completely wrong in today’s social standards. But, no matter how many flaws the original animations have, they will always be part of me.

However, there is no way to deny that some of the frowned upon ideals that the classic Disney princess animations portray influenced me, and I am pretty sure it did a lot of other girls around the globe. Some of the ideals I am referring about would be; portraying girls as fragile and incapable, showing that they need a prince to save them, they should meet their prince and marry them to live happy ever after, they should conform with their societal status, etc. Those don’t even begin to cover the distorted beauty perspectives that the classic princesses portray; fair skin, a slim body, straight long hair, etc. The lack of diversity amongst the Disney classic princesses (those created before the year 2000), is also very troublesome.

These characteristics and the overly hype power of The Walt Disney Corporation amongst the child entertainment industry did place an unconscious pressure into the minds of many kids. Specially, girls. If you wanted to be a Disney princess, you had to look like one, and act like one. And as the young Disney princess fans grew, the embedded ideals about beauty and love developed with them.

I remember being 10 years old and envying my friends that had long straight hairs, while mine was short and wavy. At 14 year old, I remember wanting to be taller and skinnier. I also thought that anytime I would meet my ‘Prince Charming’ (aka. another 14 year-old boy), fall deeply in love and then, only then, I would be happy! Imagine my disappointment when my first crush ended up being a huge epic fail.

However, the new live action Disney princess movies might be the beginning of a change. Yes, the stories overall are the same, but they leave a spark of change in the air. Spoiler alert! If you have not yet seen the Disney princesses live action movies yet, there might be some spoilers going on from here.

The main characters are stronger outspoken women that aren’t afraid to fend for themselves. Take on the live action version of Cinderella for example. Cinderella’s story is one of Disney’s most iconic and submissive of all Disney princesses, portraying the importance of beauty and fragility. However, the live action version shows a different side of this. The movie shows that before her mother dies Ella, promises her to be kind and good, then later on when her father passes, he asks her to be kind to her stepmother and sisters. Ella, being the sweet good hearted kid kept her promise to her parents even when being humiliated.

The live action movie explains to the viewer that Ella wasn’t just submissive because she was dull or afraid of her stepmother and sisters, but because she was keeping her promise to her parents. The live action version of Cinderella shows that having integrity, a good heart and strong for those you love is worth it.

There is also this one scene at the end of the film that was my hooray moment. It is the part right before Cinderella leaves with the prince, she turn around to look at her stepmother, and with the most delicate mic-drop I have ever seen, says “I forgive you.”

‘Beauty and the Beast’

Beauty and the Beast also had some improvements. Even in the original animation, Belle’s character was already stubborn, outspoken, literate and intelligent, but the live action brings out something more to her character. When Belle goes to return the book to Père Robert, they talk about Belle’s travels to Northern Italy. That small dialog might seem unimportant, but it shows Belle’s independence and curiosity about the world. That type of independence and confidence to travel the world by yourself is a trait to admire in the live action Belle.

Later on, Belle is yelled at for trying to teach a young girl to read. Of course this is a characteristic that was common for the time period Beauty and the Beast was created to be during, but it is a scene made for the live action version of the animated film to highlight the importance of literature, books and teaching young girls to read. Maybe this was a cue from Emma Watson as she is a huge advocate for gender equality. Disney‘s choice of actor for playing Belle must have been a very thoughtful one too. Emma Watson is a strong role model for any women in the world.

Much like Belle, Jasmine in the Disney live action adaptation became more outspoken and that is very evident because of the new song added to the movie. In the original 1992 animation, Jasmine only sings during her duet with Aladdin, but in the 2019 live action, the princess finds her own voice. Jasmine’s own solo “Speechless” made me speechless.

That song was a perfect addition to the new strong willed, ambitious and confident Jasmine Disney came up with. In the live action movie, it is clear to the audience Jasmine wants to be the next Sultan of Agrabah. Even tough, she has prepared her whole life for it, according to Jasmine herself, the traditions and laws will only allow a man to be a Sultan.

When confronting her father about it, even her loving father doesn’t believe she can be a sultan even if she could. But that doesn’t discourages her from the idea. For the live action princess Jasmine, being labeled as nothing else then a woman that should be “seen and not heard” is not enough, she proves that she has her own voice and ambitions.

Mulan, the only warrior among the other princesses. The story of Mulan has always been a powerful one, and the live action version shows that even more. The lack of the musical elements present in the classic Disney movie gives a more mature and serious tone to the story. This is controversial since, the songs form the original Mulan movie are some of the best Disney songs, this was an important move to try to make a Disney princess movie story a more serious one rather than just “another Disney princess story.”

The focus and the details of the battle scenes also help diverge the movie from the typical Disney princess story. The live action seriousness helps emphasize Mulan as what she really is, a warrior! This can show girls that not only man can be heroes or warriors, women also have the power to fight and defend themselves. But Mulan is not the only one that shows this female strength the in live action version. Xian Lang is the new antagonist the Mulan, and the other strong female presence in the movie. She is also a strong warrior as well as a powerful witch. Pretty cool, right?

The casting of Mulan is also a great representation of the increasing diversity in Disney movies. The cast in Mulan are Asian or Asian dependent actors and actresses, which not only helps increase diversity in the Disney universe, but also allows minority actors to shine.

Some people may view these changes and new additions to the live action remake Disney movies as an insignificant or just plain not important enough. But here is the deal, change is something that happens over time and very gradually. It is naïve to expect that Disney will change every thing considered ‘wrong’ with these classic stories. After all, they are classics, and are a representation of the time they were created.

However, there are things that can be done to adapt these stories to the more modern societal views without distorting the very beloved and famous animated classic tails. And I believe that the live actions are proving to be the tip of the iceberg of this change, which is a wonderful news!

The animated classic Disney movies were a huge part of my life, and still are, but with age and maturity I learned to recognize the flaws within the story lines. I also learned to understand were those flaws came from; a time were those aspects were still accepted by society. I grew and changed watching Disney movies and loving the princesses, and I am glad to see that Disney is growing and changing with me too.

So, do you think the Disney live action princess movies are starting to change some troublesome aspects of each story? In your opinion, what else could Disney have changed in the princesses’ stories, without affecting their classic aspects? Let us know in the comments bellow.