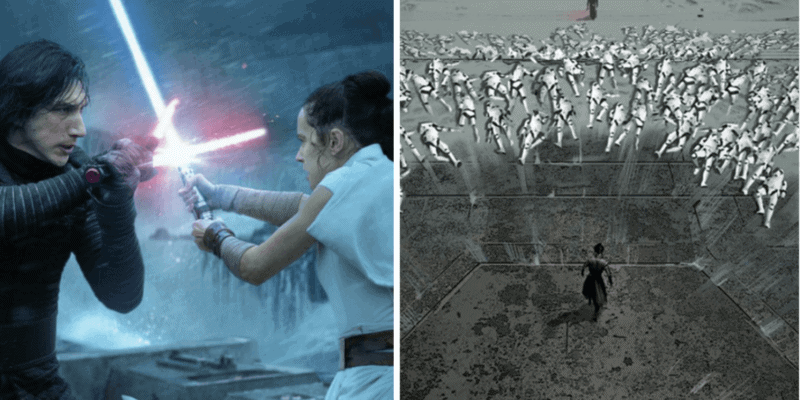 Film concept artist Adam Brockbank has taken to Instagram to share some early concept art from the Star Wars sequel trilogy, which ended the Skywalker Saga with Star Wars: Episode IV – The Rise of Skywalker (2019).

Brockbank’s first post about the never-before-seen concept art showcased Rey singlehandedly taking on a legion of Stormtroopers and, from the looks of things, doing an incredible job of decimating them all by herself.

Related: Rumors Point to Rey’s Storyline Being Continued at Lucasfilm

“An early concept demonstrating Rey’s power, on a scorched planet”

Although this battle scene with Rey, Kylo, and the Stormtroopers didn’t make the final Rise of Skywalker cut, it’s interesting to see alternative ideas of how the Disney and Lucasfilm team considered showcasing just how strong with The Force she is.

Kylo at the threshold of the cloning laboratory back when we were considering a super clean white intermediary chamber. Surrounded by attendants and being decontaminated…

Kylo at the threshold of the cloning laboratory back when we were considering a super clean white intermediary chamber. Surrounded by attendants and being decontaminated… #starwars #starwarsconceptart #artofriseofskywalker #kyloren #conceptart #conceptartenvironment

This concept art is especially interesting given Daisy Ridely’s recent revelation that Rey was almost descended from Obi-Wan Kenobi instead of an Emperor Palpatine clone. As all films do, clearly the final three movies in the Skywalker Saga went through a number of changes before the final storyline was determined.

Now that the nine-movie saga has ended, nobody knows exactly what is next for Star Wars in the film universe. Marvel and The Mandalorian director Taika Waititi has been tapped for the 2025 Star Wars theatrical release and, although he has started writing, no details about the script have been released.

In the meantime, Star Wars fans have The Mandalorian Season 2 to look forward to on October 30 and two confirmed new Disney+ shows, the Obi-Wan Kenobi series, and The Bad Batch series, coming to the streaming platform next year.

What are you hoping happens next in Star Wars movies? Did you enjoy seeing this early Star Wars sequel trilogy concept art?