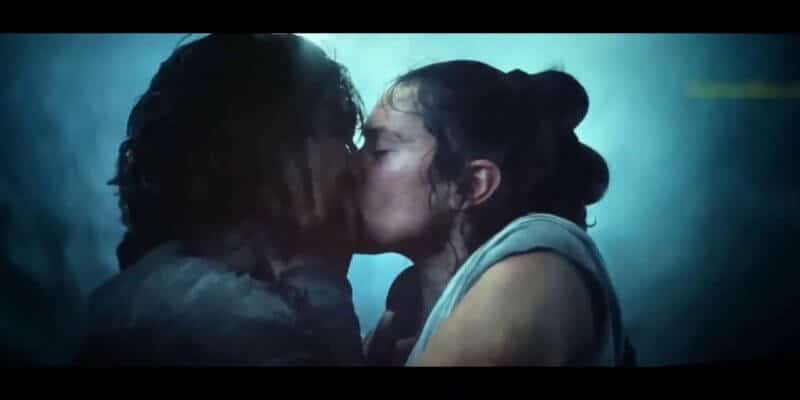 Oh Reylo. Just when the Star Wars fanbase wasn’t divisive enough, you came along with your would-be star-crossed love story of Jedi and sort-of Sith and threw a bantha into the mix.

For what it’s worth, I don’t totally hate the notion of Ben Solo (the former Kylo Ren) and Rey ending up together. Had the script foreshadowed that relationship more heavily in both The Force Awakens and The Last Jedi, it could’ve been a cool plot development that subverted the arc of Darth Vader in the original trilogy.

Episode IX infamously ends with a kiss between Ben and Rey, which many fans turned their noses up at, citing its stark immediacy as the reason for their contempt. Well, a novelization of The Rise of Skywalker, (the most retcon heavy movie of all time), has come to retcon the lore one final time. Take a look at the extract below;

‘His heart was full as Rey reached for his face, let her fingers linger against his cheek. And then, wonder of wonders, she leaned forward and kissed him. A kiss of gratitude, acknowledgment of their connection, celebration that they’d found each other at last.

But then she drew back, concern on her face. She could feel him growing cold.

Ben smiled at her.

He had given Rey back to the galaxy. It wouldn’t atone for the darkness he’d wrought, but it was what he could do.’

That’s a friend-zone kiss if I’ve ever seen one. It’s official; they’re buds, that’s all! Sorry Reylo fans; back to the fan fiction forums with you. Ben’s act of redemption may have been a defining moment, but any love that Rey had for him seems to have been purely platonic, and not romantic.

More emotionally affective, however, is what the novel reveals about Ben Solo’s final words, and warning; it’s a tearjerker. The novel tells us that the two shared one final thought through the Force as Ben lay dying, which went a little something like this;

‘A voice came to her through the Force, clear and strong. I will always be with you, Ben said. She smiled. Let the truth of it wash over her. ‘No one’s ever really gone,’ she whispered.’

Most agree that Adam Driver’s performance as Kylo Ren is one of the best elements of a pretty second rate trilogy, and this final line adds an extra element of pathos to his character. He may have been the worst, but he sure was a great villain and frenemy to Rey.

None of this additional detail detracts from what a brilliant moment that was in an otherwise deeply flawed movie. Daisy Ridley and Adam Driver both smash it in their roles and we can’t imagine Star Wars without Rey and Kylo Ren / Ben Solo.

This still doesn’t explain why Ben wasn’t at the Moisture Farm with Luke and Leia during the epilogue though. I’m still salty about that.

What do you think about ‘that kiss’ and Ben Solo’s final words? Are you a ‘Reylo’ shipper? Do you hate the additional details regarding the backstory of Emperor Palpatine that are being shoehorned in? Let us know all in the comments below.