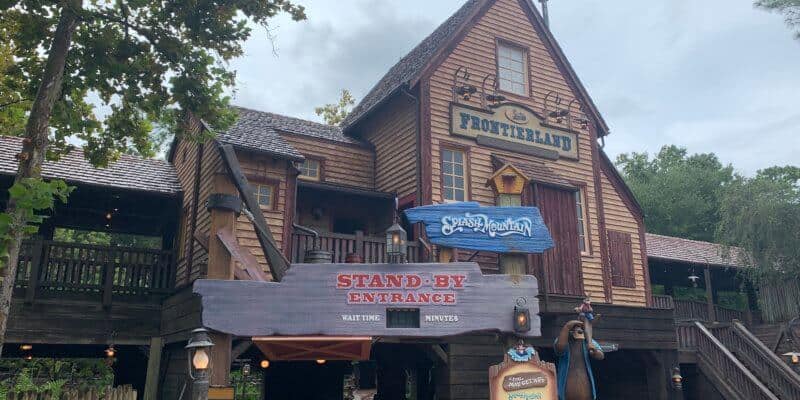 On Thursday, September 17, Lightning has arrived in the vicinity of the Magic Kingdom Park, causing all outside rides to close. As thunder rumbled overhead, Walt Disney World Guests reacted to the news by seeking shelter in the nearest indoor attraction. Since then, we have updated this article with more information.

When arriving at Pirates, I noticed the line was over 60 minutes long, and due to social distancing protocols wrapped around the building.

And it’s not the only one. According to the My Disney Experience App, wait times at Haunted Mansion, Peter Pan’s Flight, and “it’s a small world” are recording wait times over 30 minutes long despite the minimum capacity crowds. With only two hours left until the park was scheduled to close there was concern if the outside rides would even be able to reopen that day. As I left the park I noticed people who did not decide to choose an indoor attraction or leave early began to line up for last-minute gifts and treats for the Emporium and the Confectionary on Main Street, U.S.A.

A Cast Member confirmed that rides will remain closed until the lighting leaves the general vicinity. But he had no idea when that would be. Another confirmed that all outside rides must close when lightning is detected within five miles from the Magic Kingdom.

It appears, though, that lightning detection is not a cause for ride evacuations. I watched as boats filled with Guests who boarded before the closure continued to go down Splash Mountain’s Chick-a-pin hill while empty boats were seen following behind.

Central Florida is known for its afternoon thunderstorms, especially in early Fall. And AccuWeather.com has predicted Thunderstorms to visit Walt Disney World at some point in almost every day for the rest of the month of September. We recommend that Guests looking to visit the Magic Kingdom or any of the Disney World theme parks take these potential storms into account and have a back-up plan in case such temporary closures happen during your visit.

It should also be mentioned at this point that while there are the occasions where lightning warnings close down the outdoor attractions, it is extremely rare and unlikely that lightning actually strikes within the Walt Disney World theme parks. The last time it happened was when lightning struck Star Wars: Galaxy’s Edge at Disney’s Hollywood Studios in August of this year. The strike took place after the park closed for the day and no Guests or Cast Members were injured.

But regardless of lightning, Disney World’s dark rides like Pirates of the Caribbean, Space Mountian, or “it’s a small world” are a great way to get even more out of your Disney day while also seeking refuge away from Florida weather be it the rain, or the heat.

If the weather is a concern for you when planning your Disney World vacation, our friends at Academy Travel are standing by ready to help you plan your trip with full knowledge of what to expect, what your options are, and how to get the most magic out of your stay. Click here to learn more and receive your free, no-obligation quote today.

Comments Off on Magic Kingdom: Lightning Closes Some Rides, Long Lines for Others