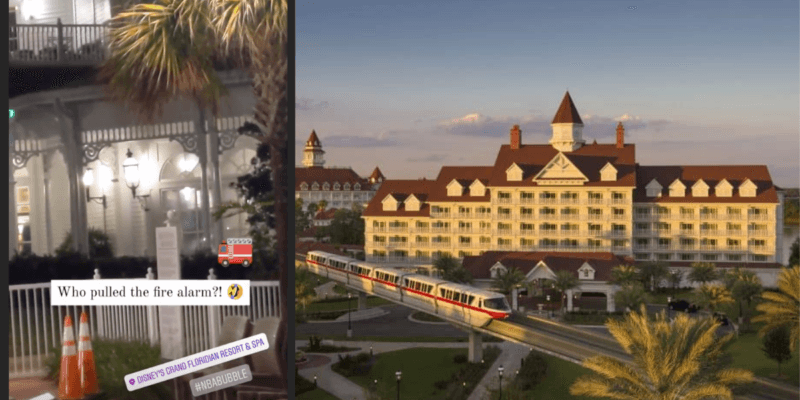 Reports are coming in regarding a fire alarm going off at Disney’s Grand Floridian Resort & Spa, prompting an evacuation last night. We first received word of the evacuation via email from an Inside the Magic reader. We later discovered that the fire alarm had gone off at the resort.

Below is a screenshot from one Disney World Guest’s Instagram story, showing the fire alarm going off late last night:

The Guest stated that the alarm sounded at around 9:17 p.m. on September 10 while she was eating at Gasparilla Island Grill. She said that one officer suspected a fire alarm had been pulled. Guests who were dining at the Grand Floridian Cafe at the time had to evacuate the restaurant, though it is currently unclear if the entire building was evacuated.

Notably, Disney’s Grand Floridian Resort & Spa is part of the NBA Bubble at Walt Disney World Resort. A few Disney World hotels (Gran Destino Tower at Disney’s Coronado Springs, Disney’s Grand Floridian Resort & Spa, and Disney’s Yacht Club) are currently hosting NBA players during the playoffs, since the NBA season resumed on Disney property in Florida. But the NBA players are gradually vacating these Disney Resort hotels, and over the next several weeks they will begin to host Disney Guests again.

The Villas at Disney’s Grand Floridian Resort & Spa, however, are currently open to Disney World Guests, as they are part of Disney Vacation Club.

Additionally, early this morning, Guests at Disney’s Pop Century Resort were woken up to the sound of a fire alarm going off at that hotel, as well.

Yes I can feel the magic. Fire alarm going off, awesome!!!

HE WOKE EVERYONE UP AGAIN

No damages or injuries have been reported, though we will update this article if anything changes and we receive more information.

A similar situation occurred earlier this week at Disney’s Contemporary Resort, in which a Guest reportedly pulled a fire alarm, prompting an evacuation. Nobody was injured and the Guests were able to return to their rooms.

As always, we will continue to monitor the latest news at Walt Disney World Resort. We will update our website as more information becomes available. If you are staying at one of these Disney Resort hotels and had to evacuate your room or were woken up due to the alarm, we hope you still have a magical vacation. Know that Disney Cast Members are always nearby to help ensure you have a wonderful experience on property.