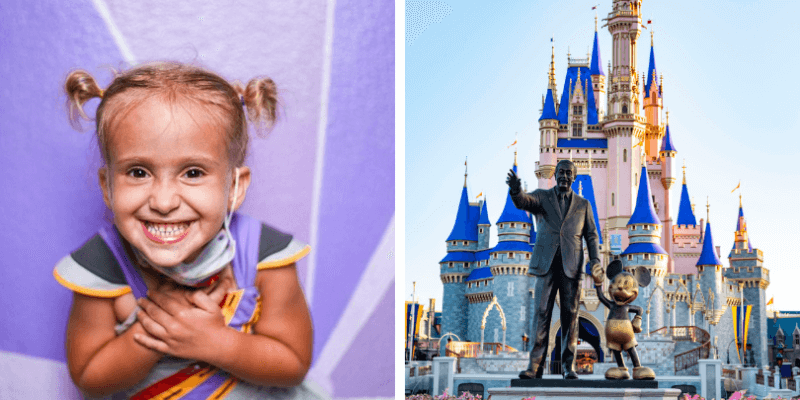 Harper Mae Comparin, is a three-and-a-half year old girl with spina bifida, a disorder that stops the spine from developing properly at birth.

However, the toddler has built her muscle strength up in the coolest way possible: by exploring Walt Disney World.

Harper initially shot to internet fame when a video of her learning to walk using the “Baby Shark” song was shared by ABC Action News. Now the “Baby Shark girl” is making waves by developing her muscle strength at the Most Magical Place on Earth.

The young Disney fan required therapy to be able to walk and talk, but was able assisted by the team at Johns Hopkins All Children’s Hospital. Physical therapy assistant Nick Hamilton was particularly comforting to young Harper.

After learning to walk with “Baby Shark” Harper is now ready to build up that muscle strength by running around the park, lining up for rides, and interacting with her favorite characters.

Related: HIIT Workout That You’ll Never Know is Training You to Be a Princess!

Harper was initially terrified of getting her leg cast taken off. Fortunately, Hamilton had a Frozen-themed solution.

A self described “big kid at heart”, Hamilton created a cast for Harper’s Elsa doll too to convince the young Disney fan that it would all be alright. It worked a treat and Harper’s mom couldn’t believe it;

“Having her baby doll that she carries with her everywhere get a cast just like hers has helped her feel better about it,”, she said.

We at Inside the Magic wish her all the best and more fun Walt Disney World trips ahead! You can keep following Harper’s journey on Instagram, right here.

Let us know your thoughts on this inspirational little lady in the comments below.