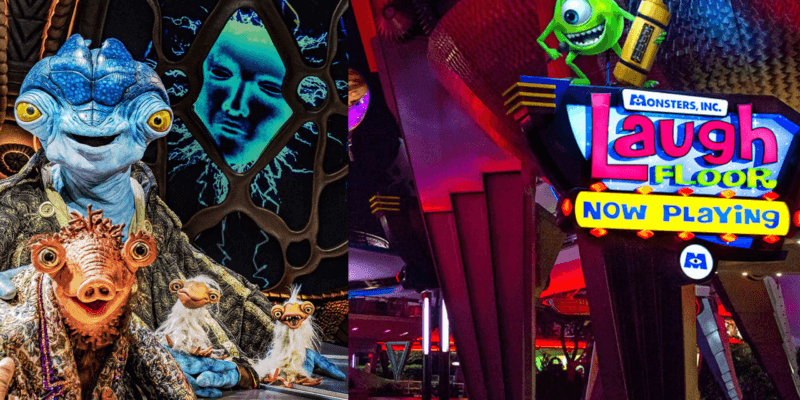 We don’t know about you guys but we often spend quite a bit of our evening before bed browsing some of the Disney subreddits on Reddit. There are some genuinely fascinating conversations on there and one that we spotted yesterday had us thinking, so we thought we’d share it with you.

Some fans are requesting that the Disney+ original Earth to Ned, comes to the Magic Kingdom and replaces Monsters, Inc Laugh Floor in Tomorrowland.

While we think the likelihood of Earth to Ned coming to Tomorrowland is pretty low, it does throw up an interesting point and one that we thought we’d explore further.

Could Earth to Ned Work?

There’s no doubt that the Jim Henson creation is a great fit for Tomorrowland and there are plenty of fans who were onboard with seeing him replace Mike and the gang. One fan even went as far as comparing Cornelius to ExtraTERRORestrial Alien Encounter:

Just bring Cornelius, I need more of his humor… And to get over his appearance, he’s giving me flashbacks of ExtraTerrorEstrial Alien Encounter and I don’t know why.

That being said, Earth to Ned doesn’t have the wide audience appeal that Monsters, Inc. has and we have a feeling that it won’t get renewed for a second season on Disney+. It’s a clever idea for a show but it tries to be a blend of a late-night talk show and a show that is child-friendly and fails on both counts apart from a few funny moments.

Was Monsters Inc. Ever a Good Fit?

We can’t write a piece like this without questioning how Mike and the gang ever got the sign-off to appear in Tomorrowland. Yes, we know there’s a reason but they’ve never really fit that well in the land.

It’s a very clever idea as a concept but it just always felt a bit odd that Monsters, Inc. was in Tomorrowland and not Disney’s Hollywood Studios. The show also varies massively in quality thanks to the jokes being told and the level of interaction that the audience gives.

Audience interaction is also something that isn’t everyone’s cup of tea so those who are unaware of the format of the show may leave feeling pretty disappointed.

How about The Muppets?

While we are talking about the Jim Henson Company we had to talk about The Muppets. We hear you, “how do Kermit, Piggy and the gang fit into Tomorrowland’. We present to you, Muppets from Space:

What do you think, is it time for Monsters, Inc Laugh Floor to be replaced at the Magic Kingdom? Let us know in the comments below!