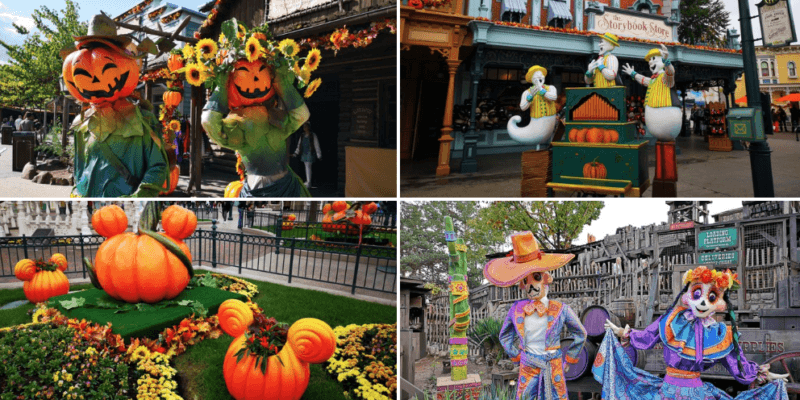 With Halloween right round the corner, Disney fans have been waiting to see Halloween decorations go up! Walt Disney World now has it’s spooky decor up at the Magic Kingdom as of today, so we also wanted to take a look at Disneyland Paris.

Disneyland Paris often outdoes themselves when it comes to the Halloween season, but with the pandemic in tow, many park goers were nervous they would not be seeing may decorations. Let’s take a look at DLP’s Halloween makeover.

The park is basically tinted orange with all of the pumpkins covering Main St. But with 2020 having such a reduced capacity, would Disneyland Paris go all-out again?

Let’s take a look at what Disneyland Paris looks like today amid all of the new Halloween decor.

Walking down Main St. it seems that the offerings are not as full in terms of decorations. What we basically have it garland and pumpkins on the buildings. Light posts remain empty and the photos seem to feel slightly lackluster.

But then we take a look at all of the added characters and our Halloween hearts begin to melt with candy corn! The pumpkin people, ghostly looking Dapper Dans, and Día de Muertos characters suddenly bring the park to life and it feels like Halloween once again at Disneyland Paris.

The fun doesn’t stop on Main St.! Frontierland also has some fall/Halloween inspired decor around the land. The orange tones go perfect with the wooden aesthetic and leaves us feeling ready for a PSL! Plus the little details in the lighting shows how Disney thinks of everything.

You can also see your favorite Disney characters in their Halloween costumes around the park!

Here we can see Duffy, Mickey and the gang, as well as Stitch sporting some Halloween costumes. Seeing the characters celebrate really adds to the added layers of Disney magic that DLP is full of right now.

What other offerings will DLP have this Halloween?

The Disneyland Paris website has released all of the offerings at the park this spooky season!

Disney’s Halloween Festival will return starting 26 September with exclusive “Selfie Spots,” a new way of interacting with some of your favourite Disney friends. Mickey Mouse, Minnie Mouse, Donald Duck, Daisy Duck, Goofy and Pluto and others will be dressed in their most wickedly colourful Halloween costumes and ready to share spooky moments with guests throughout the Parks.

In the heart of Fantasyland, the Meet Mickey Mouse theatre will be decorated in the colours of the season to welcome guests to take an unforgettable selfie with Mickey Mouse and friends.

Disney Villains like Maleficent, Ursula and Captain Hook will take over many iconic park locations to create memorable experiences. Starting 1 October, Disney Villains like Jafar and Cruella de Vil will invade the Studio Theatre at Walt Disney Studios Park to strike a pose with guests surrounded by a new Halloween décor.

They can shriek in The Twilight Zone Tower of Terror at Walt Disney Studios Park, seated in the service elevator of the infamous Hollywood Tower Hotel, facing 13-story freefalls and many more surprises.

In Disneyland Park, guests will be invited to join spirits and ghouls who enjoy nothing more than feasting and dancing in the dining room of Phantom Manor, nestled in a dark corner of Frontierland.

During the entire season, Disneyland Park will be decorated in its most spooktacular Halloween decor, from Main Street, U.S.A., to Sleeping Beauty Castle and beyond. Jack ’o’ lanterns and ghoulish ghosts will line the streets, and in Frontierland, guests will discover a colourful Mexican-inspired festival complete with lively music and prancing skeletons.

The celebration continues with a range of enchanting sweet and savoury flavours shaped like Disney Villains, and Halloween-themed merchandise will take over shops throughout the resort. For the entire month, Halloween will be celebrated at Disneyland Paris with a witch’s hatful of surprises to discover in the Parks. Even Disney Village will be taken over by pumpkins and ghosts!

For the entire month, Halloween will be celebrated at Disneyland Paris with a witch’s hatful of surprises to discover in the Parks. Even Disney Village will be taken over by pumpkins and ghosts!

Will you be at DLP this Halloween? Let us know below!

Comments Off on New Disneyland Paris Halloween Decorations Have Arrived!