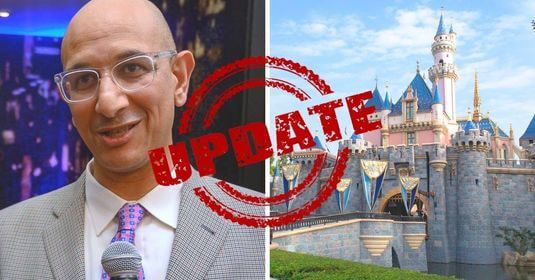 As Disneyland Guests are patiently awaiting when the resort’s theme parks will be opening again, we received a recent update regrading this matter!

A California Health Official, Dr. Mark Ghaly, just spoke out on the developments of reopening Disneyland as well as other California theme parks.

Just about two weeks ago, Governor Gavin Newsom indicated that he would be announcing reopening plans for the Disneyland Resort and other theme parks, “very, very shortly”, however we are still waiting to hear from him on this matter.

Though, we are now learning, thanks to @ScottGustin on Twitter, that California Health Official Dr. Ghaly had an update on that very matter.

"We are working with those industries to put out something that is thoughtful… that allows us to maintain the rest of our framework in a strong way…. and really following those principles of slow and stringent, to ensure those large activities are done responsibly."

Dr. Ghaly official word on the reopening of theme parks was this:

“Not yet…but we are getting very close.”

NEW: Here is latest word on the status of the reopening plans for theme parks.

"Not quite yet… but we are getting very close." pic.twitter.com/4mlbDA9kV1

He also commented on convention centers. Dr. Ghaly said that those guidelines would be “coming soon”. He didn’t say whether or not theme parks and convention centers would reopen at the same time, however, he did emphasize “soon” for both.

There has been a lot of pressure to fully reopen the Disneyland Resort. Seeing as in July the Resort reopened their Downtown Disney District. Gradually since then, the District has now opened both indoor and outdoor dining as well as reservation and wait times for retail stores.

Adding to the pressure, is the success of having the Walt Disney World theme parks in Florida back in operation. Walt Disney World has managed to even extend their hours of operation and not have a single outbreak of the Coronavirus. It seemed at first that the Disneyland Resort was going to follow suit close behind, however, Guests and Cast Members still continue to wait for Governor Newsom’s approval to open Disneyland and Disney California Adventure Park to reopen, in which officials say they have been ready to reopen since July.

What do you think about the most recent update? When do you think theme parks should reopen? Let us know in the comments!