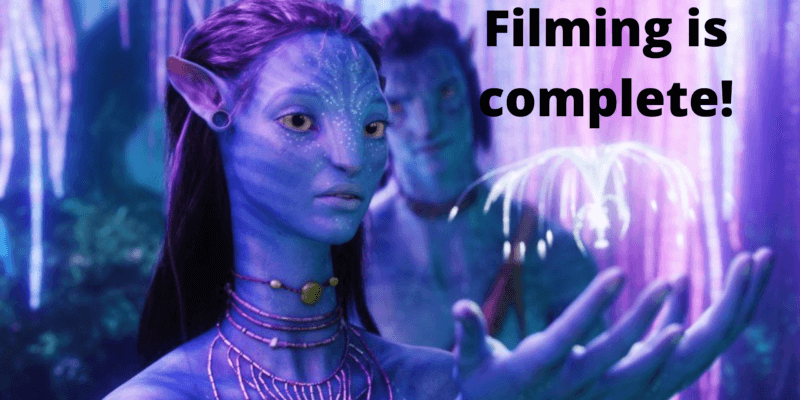 In a recent interview with Arnold Schwarzenegger,  director James Cameron confirmed that work was finally complete on the filming of Avatar 2.

You can watch the clip below:

The film has gone through numerous delays since first being announced  following the original Avatar movie back in 2009. The movie was originally planned to be released in 2017 and has since been pushed several times.

Despite Avatar being one of the biggest movies ever made, the reaction to the news that there are four sequels on the way has been mixed. Despite this, the movies are moving ahead and despite delays in filming, the plan for Avatar 2 to release in 2022 is unchanged currently.

The cast of the sequel is huge and includes returning actors Zoe Saldana, Sam Worthington, Sigourney Weaver, and Stephen Lang and new arrivals to the franchise include Kate Winslet, Cliff Curtis, Vin Diesel, and Edie Falco.

While we don’t know the official title of the sequel (The Way of the Water is the rumored title that has been floated around before) just yet, we know that a significant portion of the movie will take place in the waters of Pandora, thanks to James Cameron sharing some of the filming techniques they have been using to shoot the sequel. As you can see, there has been a lot of filming underwater from the below set photo:

Since most of the shoot took place in New Zealand, the performance capture was only delayed a few months due to the COVID-19 outbreak, as New Zealand has managed to contain the spread of the virus quite well compared to many other countries.

It will also be interesting to see whether the upcoming sequels have an impact on Pandora – The World of Avatar at Disney’s Animal Kingdom. There have been rumors in the past of a possible third attraction and it would make sense to include the actors as part of any new attraction and use them when they are filming one of the many sequels for a future ride at the park.

If you’re looking to plan a trip to Pandora at Walt Disney World’s Disney’s Animal Kingdom theme park soon, then be sure to chat with our friends at Academy Travel. No matter what your Disney Parks needs. the team will be able to help you to book your next magical vacation. Contact their team now for a free quote!

Are you excited for the upcoming sequel to Avatar or do you think too much time has passed? Let us know in the comments below!

Comments Off on James Cameron Confirms ‘Avatar 2’ Has Finished Filming