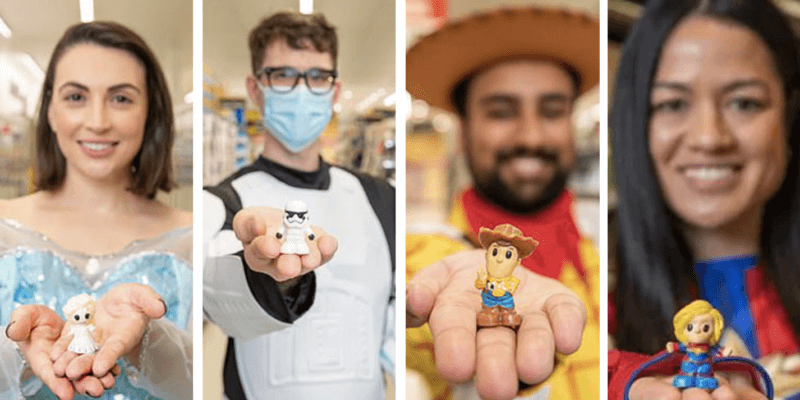 Ooshies are an extremely popular line of squishy toys that can double as pencil toppers. They are especially popular among schoolchildren, who vie to collect the rarest, most hard-to-find Ooshie characters. However, some adults also enjoy collecting Ooshie figures.

No matter how old you are, if you love these cute squishable characters, you’re going to be excited about Woolworths upcoming collaboration with Disney+!

It has been announced that the department store and the Disney streaming platform have teamed up to bring Ooshie collectors a line of 36 Ooshies featuring Disney, Pixar, Star Wars, and Marvel characters.

The rules of collecting will be the same as their previous collections including the mega-popular Lion King Ooshies promo last year. For every $30 you spend in-store or online, you can collect one Disney+ Oooshies. Spend $300 – get 10 Ooshies.

Right now, only a few of the 36 characters have been revealed: Elsa wearing her white Frozen 2 dress, Woody from Toy Story, a Star Wars Stormtrooper, and Captain Marvel.

It has been confirmed that the new Disney+ Ooshies will be available on August 26 throughout the majority of Australia. Customers and collectors in the Victoria province will have to wait until a later date, however.

“The safety and wellbeing of our customers, team members, and community remains our number one priority. Once restrictions ease and we can safely roll out the program, we look forward to sharing the Disney magic with our Victorian customers.”

It has not yet been announced if the Disney+ Ooshie collection will be available in countries outside of Australia or on the Woolworth’s website.

Are you (or your kids) an Ooshies fan? Are you excited to begin collecting the new Woolworths and Disney+ Ooshies series?