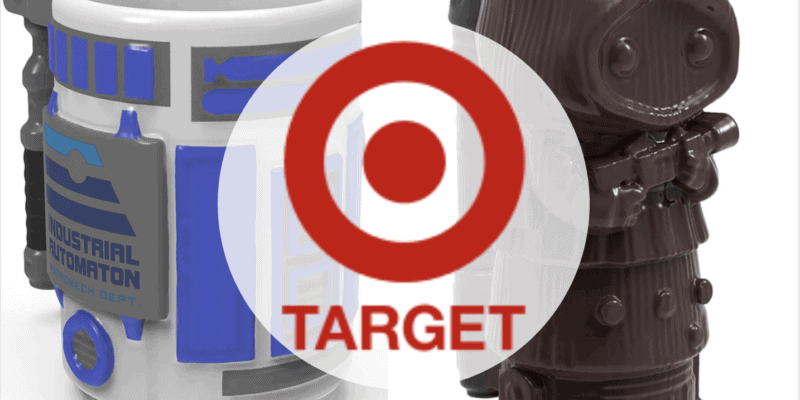 When the Star Wars: Galaxy’s Edge x Target collection was originally announced in July, few details were given about what types of merchandise Star Wars fans could expect to see on the shelves of their local Target stores.

Now, just ahead of this weekend’s August 30 launch, StarWars.com has revealed more merchandise from the Star Wars: Galaxy’s Edge Trading Post series! Here, we take a look at two products that are sure to delight Disney and Star Wars coffee mug collectors.

According to the official StarWars.com information, the figural Star Wars mugs are made by the Zak brand. They also shared this description:

Transport yourself to Oga’s Cantina or the Droid Depot with a beverage of your choice. Sip from the body of a loyal astromech or a sculpted mug made to look like a petite Jawa standing on the head of a patient R5-unit.

The Jawa/R5 droid mug is dark brown and almost resembles a Geeki Tiki mug! For those unfamiliar with the Jawa species in the Star Wars universe, StarWars.com describes them as:

…meter-tall humanoids completely hidden behind rough, hand-woven robes. Their faces are concealed within the dark folds of a cowl, from which peer their sickly glowing yellow eyes. They comb the deserts of Tatooine in search of discarded scrap and wayward mechanicals.

The second mug in the Star Wars: Galaxy’s Edge Trading Post merchandise preview is this R2-series droid (which looks suspiciously like the iconic R2-D2).

According to the Star Wars fandom wiki:

Which Star Wars: Galaxy’s Edge mug do you most want to snag at Target this weekend?

Comments Off on Star Wars: Galaxy’s Edge Mugs Coming to Target This Weekend!