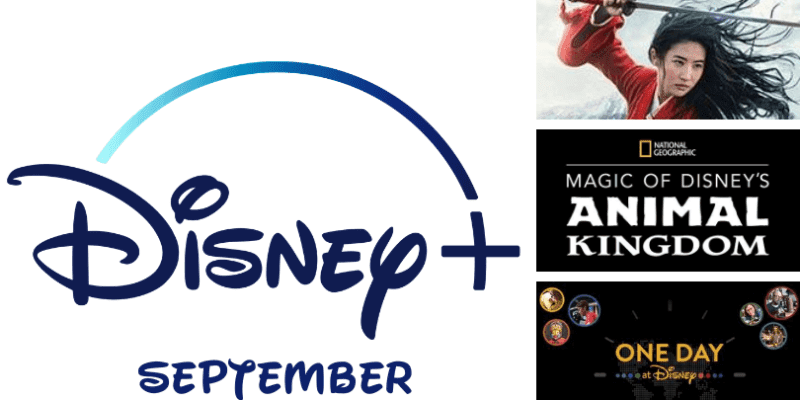 As many Disney+ subscribers are still enjoying the line-up of new Disney+ releases for August, plans can now be also made to enjoy Disney+ Friday releases for September.  Some announcements on releases were already made previously like the highly anticipated Mulan that will be released on September 4th on a premier access basis.  Now, there’s also a release date for Magic of Disney’s Animal Kingdom which was only previously announced to be coming out this fall.  Here is a full list of releases on Disney+ for the month of September.

Ancient China from Above (Season 1)

Documentary series takes viewers back in time to see aerial footage of how earlier landscapes in China were shaped, including the Great Wall, Kublai Khan’s legendary lost city and a newly-discovered city from 4,000 years ago.

Gordon Bombay is forced to withdraw from the minor hockey league with a knee injury. Much to his surprise, he is given the job of coach of Team USA Hockey for the Junior Goodwill Games in California. With most of the Ducks and a few new players in tow, he sets forth for LA. All appears to be going well for a while, but the hype of Hollywood starts to get to Gordon, and he is distracted when Iceland, the favourites to win the title, appear on the scene.

The unruly team of hockey misfits grows up a bit and receives scholarships to a prestigious prep school, where they take on the snotty varsity team.

A newspaper reporter enrolls in high school as part of research for a story.

Goblins, elves, fairies and imps, and their misadventures sparked by the battle over a powerful potion.

After Donald plays a cruel Halloween prank on his nephews, the 3 team-up with a witch and her broom to teach him a lesson about ‘tricks and treats.’

Wolverine comes to Japan to meet an old friend whose life he saved years ago, and gets embroiled in a conspiracy involving yakuza and mutants.

Acclaimed filmmaker Niki Caro brings the epic tale of China’s legendary warrior to life in Disney’s “Mulan,” in which a fearless young woman risks everything out of love for her family and her country to become one of the greatest warriors China has ever known. When the Emperor of China issues a decree that one man per family must serve in the Imperial Army to defend the country from Northern invaders, Hua Mulan, the eldest daughter of an honored warrior, steps in to take the place of her ailing father. Masquerading as a man, Hua Jun, she is tested every step of the way and must harness her inner-strength and embrace her true potential. It is an epic journey that will transform her into an honored warrior and earn her the respect of a grateful nation…and a proud father.

Ned, a blue-skinned alien and his lieutenant Cornelius, who were sent to scout Earth for an eventual invasion – but instead became obsessed with our popular culture. Now, they host a talk show.

As a brand-new Muppet series get ready for streaming, Scooter rushes to deliver the episodes — navigating obstacles, distractions, and complications that the rest of the Muppet gang throws at him.

This live action series brings iconic characters and moments from Pixar films into the real world. Filmed on location in and around New York City, the series surprises and delights real people in real locations when they least expect it.

A working-class family man, Christopher Robin, encounters his childhood friend Winnie-the-Pooh, who helps him to rediscover the joys of life.

The daughter of orthodox Sikh rebels against her parents’ traditionalism and joins a football team.

Centers on two middle school siblings who make nearly all of their decisions crowd sourcing opinions from the millions of followers of Cooper’s online channel Would You Wrather?

Europe from Above (Season 1)

A scenic documentary about places around the world and photography taken from the air with descriptive narration. Beautiful.

Ever After: A Cinderella Story

The Brothers Grimm arrive at the home of a wealthy Grande Dame who speaks of the many legends surrounding the fable of the cinder girl before telling the “true” story of her ancestor.

Kingdom of the Mummies (Season 1)

In the shadow of the world’s oldest pyramids, a team of archaeologists, led by Dr. Ramadan Hussein, has made the discovery of a lifetime: a fully intact burial complex buried deep beneath the sand.

Spider-Man teams with other Marvel heroes, in this short-form series, to teach the benefits of friendship, co-operation and heroism.

Notre Dame: Race Against the Inferno

When the historic Notre Dame cathedral in Paris, France, burns down, the country’s firefighters strive to put out the fires. These individuals then share insights about the horrific event.

A young woman with a troubled past is drawn to a small town in Maine where fairy tales are to be believed.

Luna Valente lives with her family in Cancún, Mexico. She goes to school, has her own group of friends, has a job, and loves to skate. However, her life changes when her parents are given a job offer that moves them to Buenos Aires, Argentina. There she finds a skating rink named Jam and Roller where she learns free styling. She makes new friends and falls in love with Matteo Balsano.

A musically talented teenager who returns to her native Buenos Aires after living in Europe.

Teams of tuna fisherman battle the elements, and each other, to catch the most Giant Bluefin Tuna.

Fancy Nancy: Fancy It Yourself (Season 2)

Based on a series of children’s books, “Fancy It Yourself” follows 6-year-old Nancy as she adores all things that are fancy. Nancy finds herself surrounded by people who have yet to find the joy in fancy things — so she sets out to educate them on how they can creatively improve their ordinary, dull situations. Nancy uses her exceptional imagination and a determination to “do it all herself” to combat different situations around her.

Thievery and treachery are second nature for the robber crabs that rule of Christmas Island, but these brash crustaceans face trouble in paradise.

Globetrotting celebrity chef Gordon Ramsay serves up an epic adventure in “Gordon Ramsay: Uncharted.” He travels around the world meeting with indigenous people to learn about their foods and cultures. In each location, he harvests new ingredients and samples new dishes. He also teams up with local legends to cook feasts to present to the native peoples.

An ecological drama/documentary, filmed throughout the globe. Part thriller, part meditation on the vanishing wonders of the sub-aquatic world.

The producers of National Geographic Channel’s hit series “Life Below Zero” are behind “Port Protection Alaska,” which profiles individuals trying to survive way above the Lower 48. Surrounded by the North Pacific, Port Protection is a remote community tucked into the northwest corner of Prince of Wales Island, Alaska. The approximately 100 residents who call the rugged, unforgiving land home push the limits of survival, living an isolated and risky existence of self-reliance with no roads, government or law enforcement. However, they think the risk is worth the profound reward: a world of beauty with the security of community without the constraints of bureaucracy.

Sydney to the Max (Season 2)

Set in the present day with flashbacks to the 1990s, the comedy revolves around outgoing middle school Sydney Reynolds who lives with her single dad Max and with her progressive grandmother Judy–three generations under one roof.

Join presenter Nigel Marven as he discovers the colourful and varied wildlife and culture of Central America. Join him as he climbs the ancient Maya ruins of El Mirador, Tikal and Yaxha in northern Guatemala and treks through the humid jungles of the mysterious Darien Gap on Panama’s border with Colombia in search of a giant eagle. You can be right on his shoulder as he finds colourful Quetzals in Honduras, frog-eating bats in Panama, feisty reptiles and gets close to lava spewing volcanoes in Guatemala. In the ‘Galapagos of the Caribbean’ Nigel meets brightly coloured poison frogs, a different variety for each island. There are baby Leatherbacks, a close encounter with King Vultures and the world’s most beautiful heron to be observed too not to mention a birdwatching President! All this and more as he meets locals and scientists keen to share their beautiful countries and wildlife with him.

Beneath our feet, under trillions of tons of rock, lurk astonishing and deadly secrets. Earthquakes, tsunamis, volcanic eruptions are all driven by hidden forces deep inside our planet. Now, using the latest scientific data from sensors and surface scans, we can x-ray the earth to reveal the dangers locked inside our planet. Using thousands of sensors and state of the art surface scan information, for the first time, we can create x-rays of the deep interior of our planet.

A documentary series which takes viewers behind the scenes with the animal-care experts, veterinarians, and biologists at Disney’s Animal Kingdom and Epcot’s SeaBase aquarium.

It follows Sam’s adventures at a top-secret training program for a new class of second-born royals tasked with saving the world.