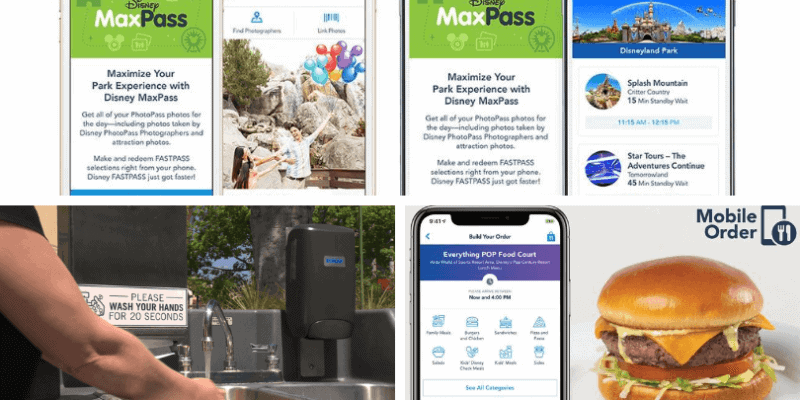 Disney fans are still awaiting the reopening of Disneyland Resort, and many have been keeping their eyes out on new updates on protocol and procedures at the other Disney Parks, including Walt Disney World, and other theme parks.

Consistently, the Disney Parks have taken many of the same measures across the board. It started to get people thinking about some of these measures like ones brought up by the OC Register, that may be a good idea to have around for good not only at Disney Parks but all theme parks.

Some of the new measures taken are not only ideal for health and safety purposes but also for Guest experiences too.

With the Disney Parks that have reopened, it has been done so with a limited capacity. In order to visit the parks, there must be an advance reservation made with a specific date or dates.

For more consistency of crowd levels, a system similar to that of the Park Pass currently in place at Walt Disney World would be great to have permanently. This may not make all Annual Passholders happy right now, but there could be adjustments made to have spots held specifically for Annual Passholders to try and accommodate for everyone without overcrowding.

FastPasses aren’t a new concept to the Disney Parks, but the MaxPass is for Disneyland Resort. It costs extra to be able to have a MaxPass added onto your ticket or annual pass. The MaxPass allows for Guests to bypass the distribution center and get FastPasses through the Disneyland mobile app. When Disneyland does reopen, this should be an option that is already added to your ticket. This way, it eliminates an extra touch point all together and Guests rushing from one spot to another just to get a FastPass.

Walt Disney World allows for advance reservation of a certain amount of FastPasses which then goes to a ticket or into a MagicBand. MagicBands are a much quicker way than scanning your park ticket at Disney World or FastPass ticket at Disneyland  (especially when a Guest isn’t prepared). The overall experience of the FastPass line would be better with permanent amenities like these throughout all the Disney Parks.

Standing in line to wait for food at the Disney Parks is probably one of the most tedious things a Guest will encounter on a Disney trip. Everyone needs to eat and wants to eat all the fun Disney snacks but also want to get on their merry way to enjoy the next attraction or entertainment. Mobile ordering was offered at some dining locations at Disney World and Disneyland, but having them throughout all the quick-service places would make for a better trip for Guests.

Dine-in restaurants have also taken on virtual queues as well through the mobile app at Walt Disney World. Having this permanently would allow for Guests to not have to wait around and can do more exploring of the park until its time for them to return to the restaurant.

It’s been seen on attractions too, most recently, Rise of the Resistance. It would be similar having a FastPass, but maybe the best system would be having a mixture of the two, allowing for Guests to make advance reservations on FastPasses and grabbing a spot in a virtual queue when they are physically at the parks.

Extra hand sanitizers and hand washing stations have been seen through Downtown Disney District at Disneyland and throughout the theme parks and Disney Springs at the Walt Disney World Resort ever since it reoepened.  After such measures are no longer needed due to the pandemic, it would be great to keep them around.  Imagine a kid eating a snack and ends up with sugar all over their face.  How great would be it be to not have to find the nearest restroom to clean up and just pop over to the nearest sink?

It was brought up to keep temperature screenings around and that is a possibility.  To make it an all in one step with security, like a thermal walk through so Guests do not have to stop twice wouldn’t do any harm to the park experience.  That way some of these health measures can stay for the well-being of all Guests and Cast Members.

Investing in permanent amenities like this would enhance the overall experience that each Disney Guest has.  If Guests have an easier time navigating their day at the Parks, it’ll keep them happy which in turn will hopefully have them treating Cast Members politely.  It would be a win-win situation for all parties!

What do you think should be a permanent addition to the parks? Let us know in the comments.