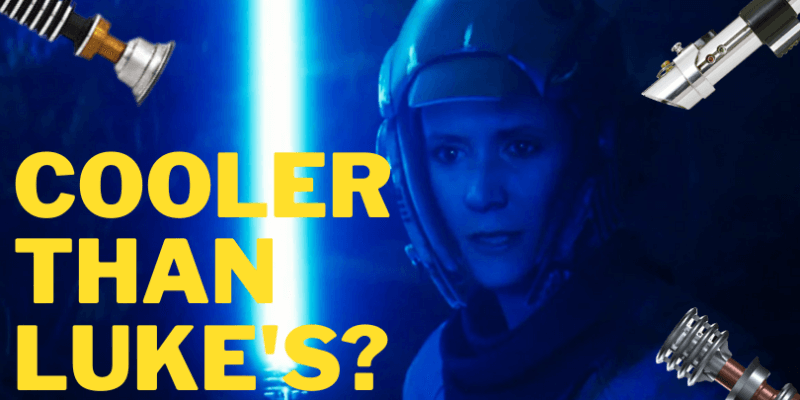 One of the wildest moments of The Rise of Skywalker was seeing a young Princess Leia duel Luke Skywalker during a flashback sequence. Fans were anxious to get a good look at Leia’s lightsaber, though the movie never really let us see it, even when used by Rey.

Thanks to an exclusive by io9, that mystery is a thing of the past as we get up close and personal with the Alderaan princess’s weapon.

Leia’s training saw her use this beautiful weapon with an iconic blue blade that contrasts her brother Luke’s green lightsaber. The image is taken from Star Wars: The Lightsaber Collection, a thorough appendix that covers every iconic lightsaber design in the Star Wars saga.

Leia Organa’s lightsaber was famously used in the final chapter of the Skywalker Saga to defeat Emperor Palpatine with both it and Luke’s blue lightsaber (formerly Anakin’s and formerly destroyed in The Last Jedi for some reason) in the final battle.

Rey finally stops using both Luke’s lightsaber and Leia’s lightsaber in the final scene of the movie where she’s constructed a much cooler and more unique yellow bladed lightsaber, seemingly using her iconic staff as a basis.

Why Rey didn’t have her own lightsaber for the entire sequel trilogy until the final moments of the last Star Wars movie, I’ll never know, but it is what it is.

The book goes into a little more detail, though disappointedly it doesn’t give any insight into Leia’s construction of her saber, her acquisition of a kyber crystal, or much indication of why it looks the way it does;

‘After the collapse of the Empire, Leia Organa briefly undergoes training to harness her Force powers on the jungle moon of Ajan Kloss. Her brother, Luke Skywalker, acts as her instructor, and Luke seeks to pass down the same lessons he learned from Obi-Wan Kenobi and Yoda. But Leia senses only tragedy at the end of her path, specifically the unshakable conviction that her training will lead to the death of her son.

Leia quits the program and leaves the lightsaber with her brother, who keeps it with him during his years of exile on Ahch-To. As a force spirit, Luke guides Rey to Leia’s hidden saber, which Rey uses to defeat Palpatine on Exegol. Rey later buries the weapon on Tatooine to honor Leia’s memory.

Leia’s lightsaber is a work of art, defined by elegant symmetry and silver and gold hues that evoke Leia’s regal upbringing on Alderaan. Curved metal grips are spaced around the midsection surrounding a crystal heart that projects a blue blade. The narrow neck and ringed emitter of the saber bear similarities to those on Luke’s green-bladed lightsaber.’

Star Wars: The Lightsaber Collection releases on October 20th and can be pre-ordered on Amazon.

What do you think of Leia’s saber? Let us know in the comments below.