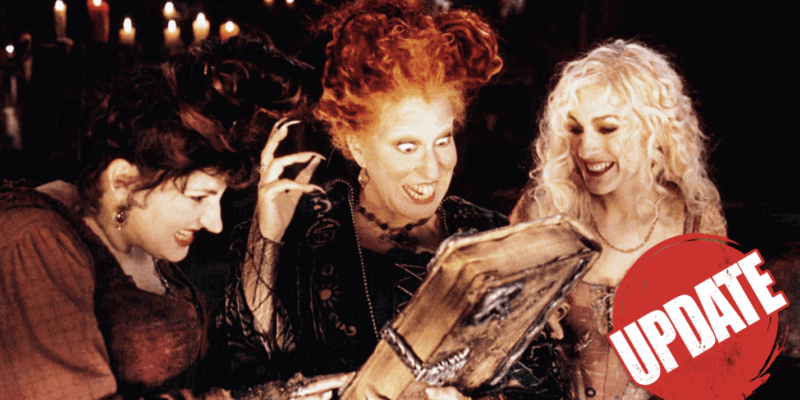 For months, there were serious rumors about a Hocus Pocus sequel swirling online. Then, in March, Disney officially announced a director for a sequel to the popular Halloween movie. Adam Shankman of Hairspray (2007) fame is set to oversee the upcoming film.

The original movie, which came out in 1993, featured Bette Midler, Kathy Najimy, and Sarah Jessica Parker as the Sanderson Sisters, three witches who had gotten displaced from Witch Trial-era Salem, Massachusetts into the modern world.

The film has a cult fan base, particularly during the Halloween season, and a second movie would undoubtedly be popular among fans of the Sanderson trio.

Now, the original writer of Hocus Pocus has spoken out about the upcoming sequel. Mick Garris told ComicBook.com:

“I’m excited about it, but I really think the main reason the movie worked was the Sanderson Sisters, those actresses in those roles, those performances, that I think is the key to that movie’s long life. It was only modestly successful when it came out, at best. And I think they are the reasons that it’s still around since it came out in 1993. And I would love to see them return in it. I think that’s the plan, but I don’t know. I heard that that is what’s happening, and I believe it’s going to be for Disney+, but I’m not involved in it, which is fine. You don’t always want to revisit all of the touchstones of your past.”

All three of the original actresses have publicly stated they would be on-board for a second Hocus Pocus film, with Sarah Jessica Parker sharing this with Sirius XM’s “Quarantined With Bruce” show in May:

“I think that it’s something that Bette [Midler] and Kathy [Najimy] and I are … very hospitable to the idea. I think for a long time, people were about it as if people were moving forward with it in a real way but we were unaware of it.

“I think now we’ve gotten to the point where we all, like, agreed publicly to the right people, [saying], ‘Yes! That would be a very, very fun idea. So, we’ll see. We’ll see what the future holds.”

According to this Hocus Pocus sequel update, it seems like production of the new streaming Disney film is imminent. Are you hoping the second Sanderson Sisters movie gets a Disney+ release date in time for Halloween 2021?