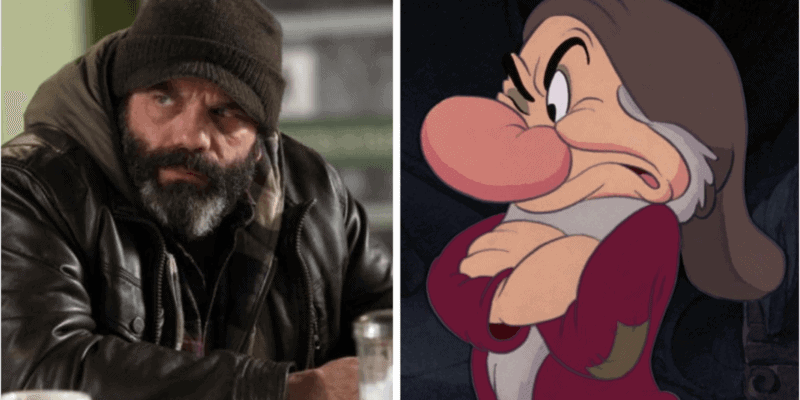 When ABC’s Once Upon a Time went off the air in 2018 after a 7-season run, many fans were disappointed with the ending for Grumpy (Lee Arenberg).

When all was said and done, Grumpy’s romance with the fairy Nova (Amy Acker) never worked itself out. Arenberg’s character had played a major role in the series and was the most heavily featured of the Seven Dwarfs, so Once Upon a Time viewers were heavily invested in his storyline.

Arenberg recently spoke to The Dipp about Grumpy’s (not so) happy ending and why he believes the romance between Grumpy and Nova was never a major plot point.

Fans of the long-running fairytale show will recall that Grumpy was named “Dreamy” when he initially received his pickaxe. When he first met Nova, the character was still known by his original name.

Arenberg spoke about Dreamy dwarf’s mishandling of his relationship with Nova, referring to a situation in which he was supposed to meet her and run away together:

“He had the opportunity when he was Dreamy to go with her and risk it, and instead he chickened out … It’s one of those things where he just blew it.”

Arenberg also addressed whether or not Leroy and Astrid (Grumpy and Nova’s respective human names once the curse in Storybrooke is broken) found a real-life fairytale.

This is a question that weighs heavily on passionate Once Upon a Time fans’ minds. Melissa Ross, admin of a 20,000-member strong OUAT Facebook group, wondered:

“Did Leroy and Astrid never find each other again once the curse was broken or did they simply decide to remain separated? Will they ever sail around the world together or are some things simply not meant to be? In a show so filled with themes of love and hope, it’s very difficult to imagine that two people who truly loved each other were simply never allowed to be together.”

Arenberg had this to say on the matter:

“In the extra scenes, there is a feature called Good Morning Storybrooke. It’s a take on a Good Morning America or a Today Show kind of thing. There’s a scene where they meet and basically she tells him that it couldn’t have worked because he didn’t listen to her.”

He continued, discussing why any future between Nova and Dreamy (Grumpy) was relegated to DVD bonus features:

“Maybe because they had bigger fish to fry, you know what I mean? I’m a supporting player, a recurring character,” he says, implying that the show’s creators perhaps wanted to focus on Snow White and Prince Charming finding each other again, instead.

Ultimately, Arenberg acknowledges that Grumpy did find his own kind of happy ending:

“If you think about it, he’s the luckiest guy. He’s best friends with Belle, he’s pals with Red.” He jokes that Grumpy was punching way above his weight.

Early in the pandemic, Arenberg and Once Upon a Time co-star Josh Dallas, who played David/Prince Charming, made a reference to the show on Twitter, comparing the coronavirus outbreak to the Storybrooke curse.

If you’re a fan of the show, make sure you catch the entire series coming soon to Disney+!

Are you looking forward to watching all of your favorite stories about Snow White (Ginnifer Goodwin), the Evil Queen (Lana Maria Parilla), Emma, Killian/Captain Hook (Colin O’Donaghue), and the rest of the Once Upon a Time gang?

What do you think about Lee Arenberg’s take on Grumpy’s relationship with Nova?