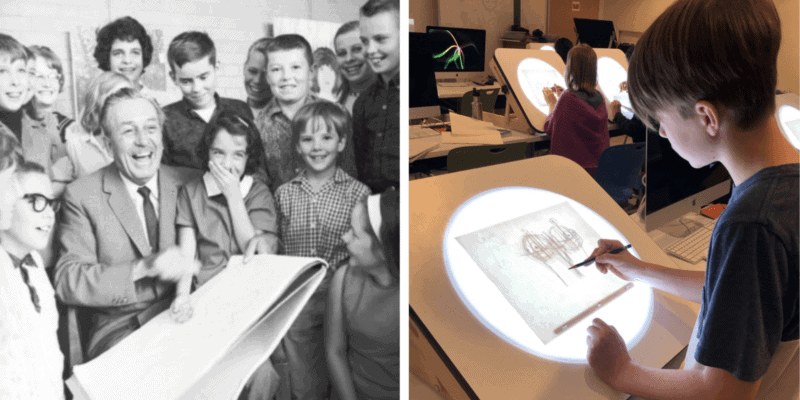 “Crowded classrooms and half-day sessions are a tragic waste of our greatest national resource – the minds of our children.”

Walt was always committed to supporting the next generation of artists and creative minds and now, The Walt Disney Family Museum is continuing his legacy.
Tonight, the Museum hosted its first ever online fundraiser, An Evening With Alan Menken. The fundraising event began with a ticketed VIP Chat about Alan’s inspiring career and continued with a free performance that featured a medley of Menken’s most famous Disney songs.
Highlights included “Under the Sea” and “Poor Unfortunate Souls” (The Little Mermaid), “Be Our Guest” (Beauty and the Beast), “I See The Light” (Tangled), “Proud of Your Boy” (Aladdin Broadway musical), “Suddenly Seymour” (Little Shop of Horrors), and, of course, “A Whole New World” (Aladdin).

During the virtual performance, Disney Legend Alan Menken was joined by a special guest. Hamilton creator, actor, composer, and Menken’s friend Lin-Manuel Miranda made an appearance.

The duo, who most recently worked on the score for the live-action The Little Mermaid together, shared a number of stories about Disney film songs and Miranda even talked Menken into showing-off his numerous awards.

Menken and Miranda also spoke about the real star of the evening, the At Promise Youth Animation Academy. According to official information from The Walt Disney Family Museum, this Bay Area high school facility is designed to build upon “Walt Disney’s legacy of fostering the next generation of creative talent (who, like him, come from humble beginnings), as well as the Museum’s own commitment to underserved individuals and communities.”

•The Academy will be modeled as a four-year high school, concentrating on recruitment from historically underserved communities.

• Curricula will center on animation, with a full-length animated film contemplated as a graduation project.

• Lessons will be structured around the 12 principles of animation, storytelling, and short film development.

• This goal is to become a national model for programs in the animation and film industries, utilizing the power of the arts to transform and enrich the lives of students.

How can you get involved?

If you, like Walt himself, are passionate about both Disney animation and encouraging the next generation of creative talent, you can support the At Promise Youth Animation Academy initiative in several ways over the course of the next week.

For 7 days, The Walt Disney Family Museum’s text-to-donate option will be available. Simply text WDFM to 41444 to learn more.

Until next Thursday, you can also support the launch of the new Disney Academy by purchasing memorabilia from The Walt Disney Family Museum’s eBay auction. Bid on auction items here.

For additional information about the Disney At Promise Youth Animation Academy, reach out to Kirsten Komoroske at kkomoroske@wdfmuseum.org.