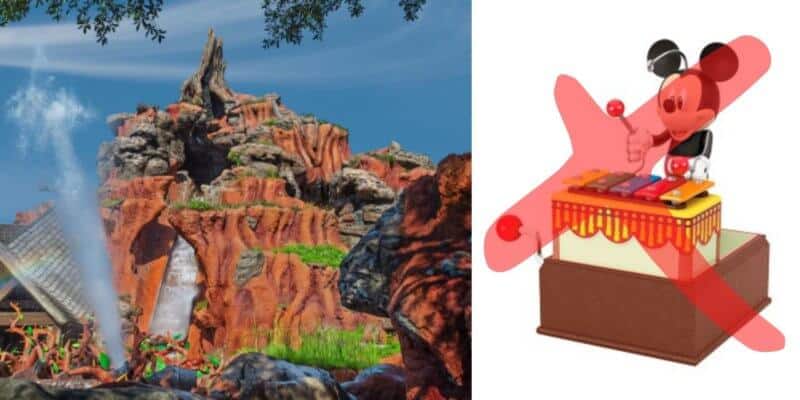 It’s almost as if Thanos snapped his fingers on “Zip-A-Dee-Doo-Dah” because it is quickly disappearing from all things Disney! With the news of The Princess and The Frog taking over the IP theming of Splash Mountain, fans were not sure when this would really begin.

Although the ride is currently still operating, we have slowly started to see how Disney is pulling away from the classic attraction, from in the parks to affiliated merchandise.

Hallmark currently has a 2020 Disney Keepsake collection for sale with various retro looking Disney ornaments, but one went missing. The 2020 Disney Mickey the Musician ornament was set to interact with its owner playing the Splash Mountain theme song with a turn of the crank. The ornament can now no longer be found on the site and hookedonhallmark.com deemed the release “canceled.”

Fans have also taken to Reddit to discuss the canceled ornament. Although Disney has not explicitly said why the ornament is no longer in stock, many believe it is clear that the Song of the South reference is the main reason.

How else has Splash Mountain Changed at Disney?

This news comes as no surprise as we have also recently discovered that Disney *quietly* removed the same song from the area music loop between Disneyland and Disney’s California Adventure and at Downtown Disney. With the subtle Splash Mountain retractions, anything to do with the IP is now coveted to fans. With Splash Mountain toys and memorabilia constantly selling out, fans are doing whatever they can to own a piece of the attraction before it’s gone. Guests have even gone as far to petition the removal of the attraction, and keep their favorite childhood ride.

But alas, it seems like “Zip-A-Dee-Doo-Dah” is headed toward the Laughin’ Place.

Are you going to miss hearing the classic melody when you walk around Disney Parks? Let us know below!