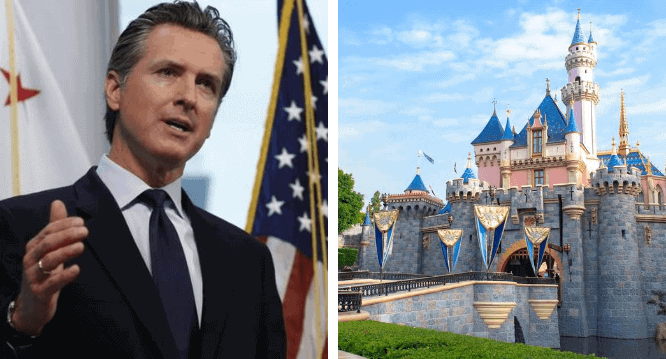 California Governor Gavin Newsom has shared that this afternoon he has a meeting to discuss the reopening of Disneyland and other Southern California theme parks. For months, even throughout the Earnings Call, Disney officials have remained mum on news discussing reopening Disneyland, or even what theme park reopening guidelines they had. But today, Newsom announced he is “actively looking to see where we land” on these theme park issues, as his meetings with the theme parks are forthcoming.

Information is trickling in about the California theme park issue, as seen in the Tweets below by various users:

Newsom said the reopening of theme parks is a “very dynamic conversation.”

…we are trying to accommodate for some of the other amusement activities in this state. You will be getting that as soon as we work through that. One of my afternoon meetings is in this space… and we are actively looking at where we land on that.”

Today @GavinNewsom gave an update on the reopening of Disneyland and other theme parks. pic.twitter.com/xEAikwmXay

Newsom also Tweeted this update: the state is launching new guidelines for reopening businesses. Orange County is currently in the “Widespread” category. According to these metrics, it may be several weeks before Disneyland and Disney California Adventure can reopen, but we are still looking to Disney for more official information.

NEW: California is launching a Blueprint for a Safer Economy.

Your county will be assigned a color based on:
– Case rate
– Positivity rate

Your color determines how businesses can operate in your county.

OC Register reports that Newsom will give an update “soon,” though we don’t yet know when.

“It is a very dynamic conversation,” Newsom said Friday. “So we didn’t include it in the update today. That is a separate conversation.”

Earlier this week, we shared a petition discussing the case for a Disneyland reopening created by a Disneyland Resort Cast Member, eager to get back to work. The Cast Member, named Jose Martinez, sites both his want and need to return to work, saying that he was more than ready. The same could be said for Disneyland Resort itself, as Disneyland officials have been cited as saying Disneyland Park has been ready to reopen to Guests since July of this year.

Josh D’Amaro, Disney Parks, Experiences and Products Chairman, would agree. D’Amaro told The Dow Report, “…we don’t have any California guidelines for opening. And as soon as a reopening date and those guidelines are set, I can tell you we’re ready.”

Downtown Disney District (Disneyland Resort’s version of Disney Springs) visitors have been watching the touchpoint gates as plexiglass was installed and safety measures were being put into place. With Walt Disney World Resort effectively handling a “new possible epicenter” of breakouts, health and state officials maintain that no new outbreaks have been linked to the theme parks during the phased reopening plan. This means that Disneyland may possibly be able to reopen as well, while copying these safety measures.

More information to come as this situation develops.