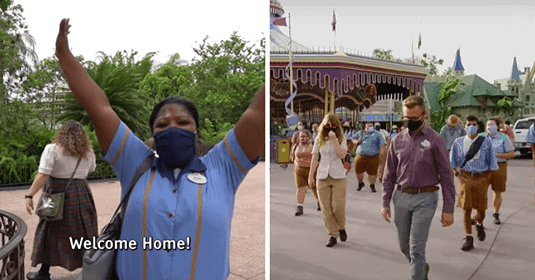 Despite ongoing contention and union negotiations, the Walt Disney World Resort in Orlando, Florida reports that “tens of thousands” of Cast Members are returning to work and prepare for the reopening scheduled to take place at the end of next week, according to Deadline. This news comes days after one Cast Member union, Actors’ Equity, rejected the mega-resort’s safety plan set for its performers.

“With just eight days until we reopen our first theme parks at Walt Disney World Resort, tens of thousands of cast members have been straightening up our nametags (and grabbing our face coverings!) as we begin to return to work. As we count down to the phased reopening of our theme parks, we’re looking forward to welcoming our fellow cast members home to begin training in preparation for reopening.”

The blog post, written by Laurel Slater, Manager of Communications, Walt Disney World Public Affairs, included a new safety video that showed Cast Members returning to take part in special training. The resort states that it is “dedicating thousands of hours to health and safety training because we know that it will take all of us working together to responsibly create the magic once again.”

But while Disney has attempted to advertise all of its Cast Members as being excited to be back in the theme parks, the New York-based Actors’ Equity Association is not so convinced.

Inside the Magic reported that the union rejected Disney’s safety protocol because it did not include testing for performers.

“Disney knows that testing makes for a safer workplace,” the association’s executive committee wrote in an email to members. “Why else would Disney agree to testing for film productions? If testing helps keep a film set safe, that is also true for performers in the parks. Despite that, we have not reached an agreement with Disney for testing.”

When Disney shared its new safety video, Equity shared it saying, “If you are focusing on safety, we hope you will test performers, since there were 10,000 new cases of COVID-19 yesterday alone.”

If you are focusing on safety, we hope you will test performers, since there were 10,000 new cases of COVID-19 yesterday alone. $DIS @Disney https://t.co/Vo0clUPKvF

Disney did not make it clear whether or not the Cast Members in the video are affiliated with any union.

Walt Disney World is set to begin reopening with the Magic Kingdom and Disney’s Animal Kingdom on July 11, followed by EPCOT and Disney’s Hollywood Studios on July 15.