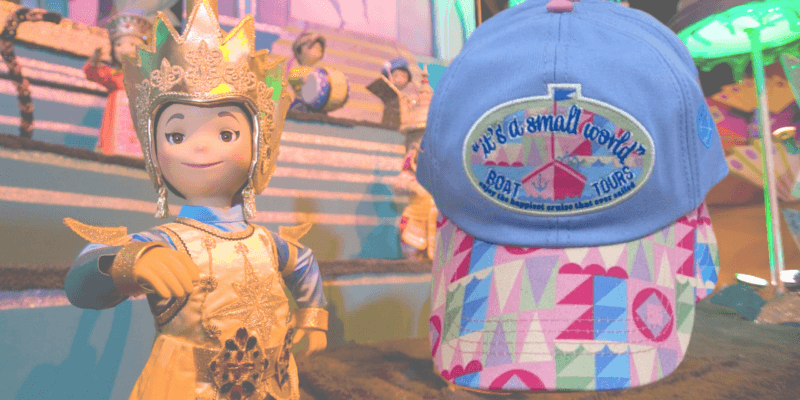 We know that ‘it’s a small world’ is an attraction that splits Disney fans right down the middle and we think that this hat might do the same thing.

We spotted this new ‘it’s a small world’ hat when enjoying the reopening of Downtown Disney at Disneyland and we think it looks pretty awesome. Check it out in full below:

The text on the hat reads:

‘it’s a small world’ Boat Tours. Enjoy the happiest cruise that ever sailed

In addition to the design on the front of the hat, the side features several patches, some of which highlight just how long the attraction has been a part of Disney’s history:

The hat is a little on the expensive side at $27.99 but for any superfan of ‘it’s a small world’, the purchase is a no brainer!

It was pretty busy today in the area with Cast Members pausing guests being allowed into the parking lots ahead of Downtown Disney opening.

Still, it’s fantastic to see both Disneyland and Walt Disney World reopen in some capacity and given all the new measures that have been introduced to keep guests safe across both resorts, here’s hoping they both stay open now.

If you’re planning a trip to Disneyland or Walt Disney World then let our friends over at Academy Travel help you plan your next vacation. Whether you just want to visit a couple of the theme parks, book a Disney Resort hotel or need help understanding dining reservations, the team can help. Contact their team now for a free quote!

Have you visited Downtown Disney since it reopened? Let us know what you think in the comments below!

Comments Off on New ‘it’s a small world’ Hat Arrives in Disneyland!