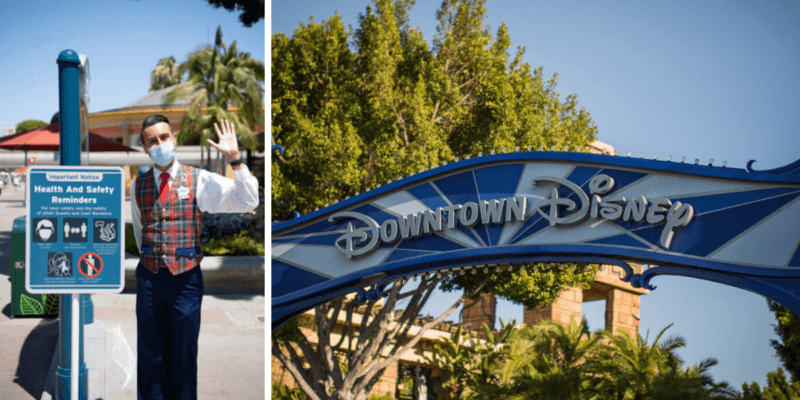 We are now into the second day Downtown Disney District’s reopening and some would-be Guests are left wondering how Disneyland’s Cast Members are maintaining social distancing and other health and safety measures put in place.

We at Inside the Magic decided to ask that question, and here is what we found out:

Every Guest looking to enter the Downtown Disney District must undergo a temperature check. Considering the fact that it is summer in Southern California if, at first, a Guest reads a temperature, they will be allowed to sit in a cool-down tent for a short period and try again. If they fail to read a temperature below 100.4 degrees after cooling down, they will be sent home.

Cast Members told us that while almost all Guests comply, a few were occasionally found to be wearing their masks incorrectly, leaving their noses sticking out. They have been quick to correct the Guests on this issue.

Downtown Disney’s Cast Members have been hard at works social distancing people by party. Especially in line. They will constantly ask how many people are in your party ask all those not in your party to remain six feet ahead or behind you.

Hand sanitizer stations are also found at the front of every line, and Cast Members are keen to make people aware of the sanitizing and cleaning stations installed throughout the shopping and dining center.

For those who experienced or saw footage of reopening day’s crowd and experienced a surprise lack of enforcement in certain areas, Cast Members explained that the reopening day crowds were a significant factor. World of Disney, for example, was calculated to fit more people than originally planned. Large reopening numbers made it difficult for Cast Members to enforce health and safety measures. Those numbers have been diminished significantly today both in how many Guests arrived on-property and in how many Guests are allowed into World of Disney at a time.

Above all else, though, Disneyland’s Cast Members have approached Guests with the utmost kindness and respect.

One Cast Member told one of our reporters that it has been going fairly well. She said,“this is what we have to do to get through this.”

What do you think about the way Cast Members are enforcing the health and safety measures at Downtown Disney? Do you think they are satisfactory? Why or why no? Let us know in the comments!