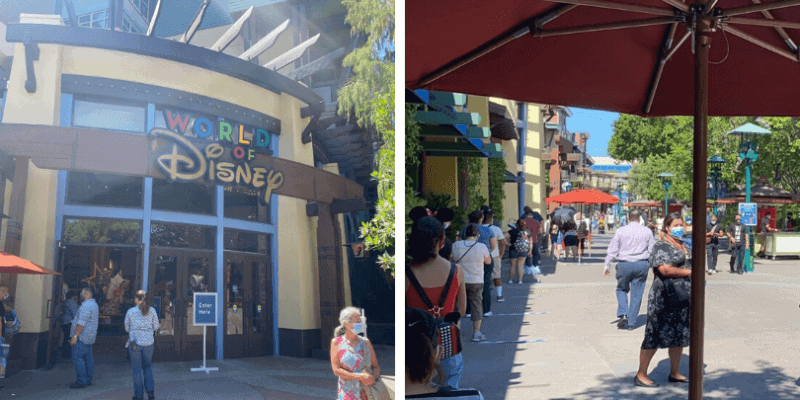 Downtown Disney at the Disneyland Resort in Anaheim reopened yesterday to the public after a 4-month closure.  Crowd levels were busy, so much so that they temporarily paused entrance into the Simba Parking Lot for Downtown Disney before even 10 am!  With that type of a crowd level, you would have thought you were actually inside the theme parks, but that just might be the new physically distanced queues you see in front of each storefront.

Parking was a challenge yesterday with bumper to bumper traffic.  It looked like you were waiting to enter or exit the attractions Autopia or Radiator Springs Racers.  As you can see from the photo below, Magic Way is empty around the same time it was packed yesterday.  Our reporter yesterday, wasn’t able to make it into the Simba Parking Lot, but today was one of the first ones in as parking officially opens at 9:45 am, but yesterday Guests were let in much earlier than that yesterday and today, were let in at 9:30 am.  For the time being, parking is free and there is no validation needed, but we are not sure how long this will go for.

Upon leaving today’s trip to Downtown Disney, the Simba Parking Lot was still not at capacity with plenty of available spaces.  Parking in every other space was not enforced and we do not know if that will be.  It maybe start that way just so that Guests are not arriving in a close proximity to one another and trying to exit their vehicles at the same time.

Guests are still eager to get into Downtown Disney, but it’s definitely not at the same level as it was yesterday.  Guests were missing Disneyland so much that they had to get in on the reopening day of the Downtown Disney District!  Everyone will head towards the Temperature Check Tents and once they make it through, they’ll be able to get cleared through the security checkpoint too.

As Downtown Disney is an outdoor promenade, it’s still easy to be able to stay socially distanced as the reminders on the signage around the property ask you to do.  On a hot day, you’ll see many people trying to catch a break under one of the big shady trees.  There aren’t many of these so yesterday it is very easy to see the difference between yesterday and today’s crowds.  You’ll find that are more Cast Members than there previously was walking about, but they too are socially distancing.

A few hours after today’s opening, the crowds were still quieter than yesterday.

As you may have already heard, the Disney Resorts have introduced a new virtual queue system and that goes for Downtown Disney as well.  Yesterday, some of the stores had upwards of 45 minute wait times to return to the store in order to limit the capacity within the stores.  As you see from these photos, some of the stores don’t currently have a wait.  They are expecting it to get busier throughout the day, but have yet to need a virtual queue.

There is one store that has a noticeable long line today as there was yesterday though, and it’s World of Disney.  Right at the start of the day, there was a need for a virtual queue.  Today, there is a socially distanced line that starts from the entrance furthest into the rest of Downtown Disney (by Starbucks) and wraps around the building down to the esplanade right before the park entrances!  Just after 10 am, the World of Disney enacted the virtual queue so that the physical line would not get any longer.

Yesterday, World of Disney calculated a much higher number could be inside the store, but they have scaled the capacity much lower today. This allows there to be much fewer people in the store to avoid overcrowding.  They want people to feel as safe as possible when shopping.

Inside World of Disney

With the capacity being lower in World of Disney today, there are other operational changes that were put into place as of reopening yesterday.  There is more signage as reminder to maintain social distance and traffic flow signs.  During checkout, you’ll see marking on the ground to ensure a 6-ft distance between you and the next party, and a plexiglass that protects the wellbeing of Guests and Cast Members.

For more information on what you should know before going to Downtown Disney District, check here.  A full list of reopened stores can be found here.