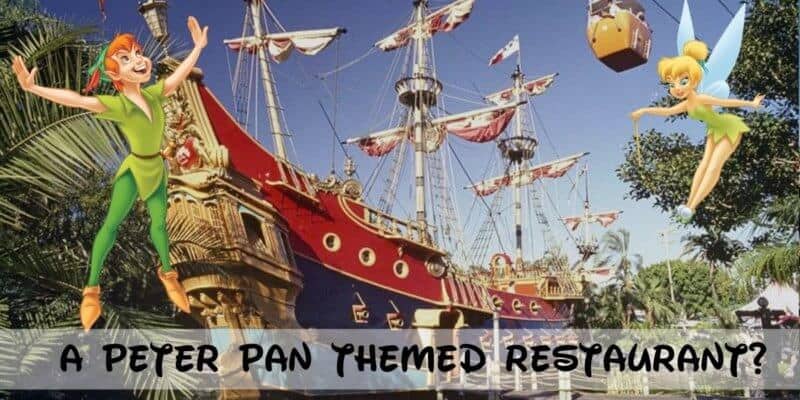 Back in 1955, Disneyland opened up a unique Peter Pan themed restaurant. Beginning on August 29, 1955, the Chicken of the Sea Pirate Ship and Restaurant welcomed Guests to dine aboard a pirate ship!

One of the many things we love about Disney Parks is the incredible detail and elaborate themes associated with the attractions, shows, and restaurants located throughout the theme parks. This restaurant in particular fell into that category and even included Skull Rock Cove right from out of the animated film where Guests could sit and enjoy their meal.

In 1969, the Chicken of the Sea Pirate Ship and Restaurant decided to change its name and was then called Captain Hook’s Galley. However, in 1982 Disney removed the restaurant as part of the creation of New Fantasyland at Disneyland park.

YouTuber mrcheezypop recently shared a video on the vintage Peter Pan restaurant, which you can watch below. Within the video, he shares a view of the book “Walt Disney’s Guide to Disneyland”. Once he opens up the book, you can see the Pirate Ship on the map located inside Fantasyland (I mean, where else would it be located?)

The views from the restaurant were stunning — You could see Skull Rock (which had a running waterfall coming from its mouth), it’s a small world, Casey Junior’s Circus Train and more from your table. I mean, this is Fantasyland at its core, don’t you agree?

There also used to be a talking parrot named Paco who Guests could actually meet! After seeing the video and looking at these vintage images, I know I would love to see Disney Parks bring back this restaurant. Whether it be in Fantasyland at Disneyland park again or if they were to build it elsewhere like at Magic Kingdom in Walt Disney World Resort (or both!) — Either way, I think this could be a huge hit for Guests at any Disney Park.

Legend has it that the watery rockwork which is adjacent to the Dumbo Flying Elephant queue line and the Storybook Land Canal Boats is actually part of the original Skull Rock Cove. You can see the rockwork in the photo below.

The good news? Guests can still dine aboard a pirate ship as the legacy of this popular Disneyland restaurant still exists today. If you ever have the chance to visit Disneyland Paris, be sure to check out Pirate Galleon, which is a re-creation of the original Disneyland park restaurant! The official description for Pirate Galleon reads:

Jump aboard this famous Jolly Roger-flying galleon for an “all hands on deck” buccaneering blast. Arrr!

Gather ye little rapscallions, man the decks and commandeer the Disney Pirate Galleon. Young marauders can scarper from port to starboard and inspect the cannons. But they mustn’t let their guard slip for a second, as pesky pirates will have them walking the plank in no time at all!

Do you remember when Disneyland used to have a Peter Pan themed restaurant? Have you ever visited the replica in Disneyland Paris? Let us know in the comments below.

If you want to visit any of the Disney Parks on your next family vacation, but aren’t sure where to begin planning, then don’t hesitate to reach out to our friends over at the Authorized Disney Vacation Planners at Academy Travel for a free quote.