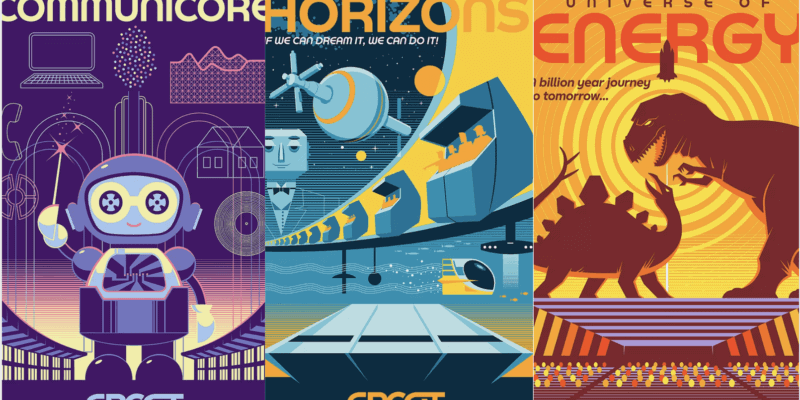 The ‘EPCOT Forever’ poster series celebrates all of the things that make the EPCOT theme park great. When Walt Disney developed the idea for EPCOT (that’s Experimental Prototype Community of Tomorrow for those who don’t know), he originally wanted the Disney park to be somewhere families actually lived.

Even though that didn’t happen, EPCOT still celebrates the promise of the future, as this new set of limited edition EPCOT posters portrays. Each of the three brand new ‘EPCOT Forever’ posters features a design from Future World. This area is currently undergoing a major renovation that will make it even more relevant to modern Disney World Guests.

shopDisney features the following description of the CommuniCore poster:

Representing both CommuniCore East and West, this limited-edition poster created by Eric Tan illustrates the retired hub of EPCOT and the technological advances in the 1980s. CommuniCore was closed and was reimagined as Innoventions, which recently closed in 2019.

The Future World CommuniCore poster can be purchased here for $90.00.

The next poster in the new Future World collection celebrates the former dark ride Horizons, which ran from 1983-1999.

shopDisney features the following description of the Horizons poster:

In remembrance of the dark ride attraction, Horizons, this was created by artist Eric Tan. This limited-edition poster replicates the nostalgia and futuristic aspect of the attraction, which was located where Mission Space is currently located in Future World.

The Future World Horizons attraction poster can be purchased here for $90.00.

shopDisney features the following description of the Universe of Energy  poster:

The Universe of Energy Pavilion, a beloved slow-moving dark ride attraction in Future World may be gone, but will live in everyone’s hearts forever. Created by artist Eric Tan, this limited-edition poster brings you back to the attraction, now being constructed as Guardians of the Galaxy: Cosmic Rewind.

The Universe of Energy poster can be purchased here for $90.00.

All of the new EPCOT posters available on shopDisney measure 27″ x 18″ and have these details:

Are you going to buy a new EPCOT Future World poster? Which Disney Parks collectible poster in the series is your favorite?

With upcoming changes to Spaceship Earth, the World Showcase, and Future World, there’s no better time to start planning a trip to see how the EPCOT experience has changed. Let the team at Academy Travel help you plan you next Disney vacation. Get your free quote today!